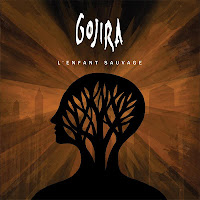 Easily one of my most anticipated releases this year, Gojira's fourth album comes at a point in which the French band's star couldn't possibly be rising along a steeper incline. Strong label support from the cold/hot Roadrunner, doubtlessly huge touring plans, a backlog which has only progressed in quality since the 2001 debut Terra Incognita, and an audience which seems to transcend any particular pigeonhole into which you might place it, they've got the chops and support to become one of the premiere 'groove' metal icons in the world. L'Enfant Sauvage is not likely to disappoint anyone with a strong connection to the past releases, and proves a pleasurable listen of some depth through numerous spins.

That's not to say it's a masterwork, or even that it surpasses From Mars to Sirius or The Way of All Flesh in quality, because for the first time in the band's chronology, I feel like we're faced with an album that does not progress from its predecessor in any blatant, meaningful way. The post-hardcore inflected rhythm guitar chugging, perky emotional tremolo or tapped melodies, expressive percussion and gruff vocals all return are by now all par for the course on a Gojira record, and the patterns proposed here do not carve themselves a new path through their sonic framework. If there's one exception, it might be the sheer atmosphere evinced through a tighter, more compacted space than The Ways of All Flesh. This is a shorter album, with only the opener "Explosia" eclipsing six minutes, and the Frenchmen manage to effectively exhibit mood and tone with no need for rampant technicality or undue complexity, while retaining the same modernist aesthetic in the riffs and lyrics which broke them out from the depths of the underground.

Where I enjoy this band the most is in their ability to communicate a hybrid of psychedelic and mechanical emotions through the hypnotic structure of the note progressions, and L'Enfant Sauvage has not let me down in this regard. The way the lush tapping repetition in instrumental "The Wild Healer" plays off the sludgier rhythm guitar, ringing ambiance and lightly distorted bass is so beautiful I wanted it to go on forever (it's not even 2 minutes long), while the denser chugging and harmonic sweeps of cuts like "Planned Obsolescence" build to an efficacious battering ram of headbanging payout. The vocal arrangements here are enormous and inspired, almost as if one were experiencing a robotic, post-metal Pink Floyd on "Liquid Fire"; and the use of cleaner guitars throughout the record ("Pain is a Master", etc) do not derail from its numbing convocations of wrenched violence and fragile melody.

Production and performance are two huge factors for Gojira, and the former is sleek and potent here which is truly key to the band's simplistic, palm-muted calculations. Without the strong mix, recorded in New York and assisted by Josh Wilbur (who has also worked with the popular Lamb of God), such a tactic might not yield such a penetration in the listener's skull. Everything is as clear as day, yet as heavy as nightfall. Mario Duplantier's beats are never showy or overly indulgent, but surprisingly organic considering just how damn mechanical the overall writing can often seem. As usual, I love Joe's vocals for their unique timbre, whether jarring and hoarse or ascending to some wistful, fulfilling harmony. Always, he sounds like an internal monolog being cyphered through the listener, one of great pain and joy and volume.

If anything holds L'Enfant Sauvage back, it's that the actual structures of the riffs here just don't seem all that novel or wholly consistent in their compulsion. Individually, the very stripped down note sequences don't hold a lot of replay value, so without the vocals, drumming and full, ooze of the bass, they might seem a bit undercooked. The band lacks the benefit of surprise here, and there are few songs quite at the level of an "Oroborus" or "Ocean Planet" in breadth of power. But that said, I've still been enjoying the heck out of this thing, despite its failure to set any new bars. It's a case where the phrase 'more of the same' doesn't equate with a negative resonance, and Gojira's balance of crushing and subtlety still shakes my teeth.