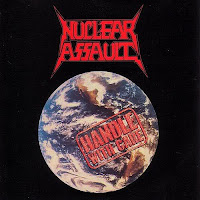 Handle With Care was about the time Nuclear Assault broke out from the underground to that tier of bands primed to be the next big thing (along with Testament, Death Angel, Forbidden, Exodus, Suicidal Tendencies and so forth). They had transferred over to the newly established In-Effect records alongside several of their New York contemporaries, and this was a huge album for both that imprint and the band, charting about 20 slots higher than Survive, and to date, probably their highest selling. They had gone from buzzed about to fawned over, and had solid video support for songs like "Trail of Tears" and "Critical Mass", the latter of which featured 80s scandal 'starlet' Jessica Hahn reclining seductively in a chair while the band thrashed about her in an oil field, occasionally flashing over to shots of landfill heaps. Hey, it WAS still the 80s...

I've heard people speak of this as the 'sellout' album, or the official shark jumping, but frankly I find such a notion delusional at best. If anything, Handle With Care was a more seasoned, mature, offering that missed the memo where they tell you such a transition is suppose to be accompanied by softer tunes and sterile studio production. Nah, this is just as rambunctious as Survive, permeated with hair flailing grooves and flooded, caustic bass lines which up their distorted tone to the breaking point. The lineup had remained the same for years, so they were playing tighter than ever, and if Handle With Care could be considered the 'best' at anything, it would be its staunch sense of pacing. The tunes here flow in and out of one another as if they were borne off a brilliant blueprint for thrashing, crashing and setting a mood, and I'd at least hold up the first four cuts (and three of the final four) cuts on the record among the best they've ever set to tape. In fact, it's not really a surprise that the album was so successful, because on a tune for tune basis, there are arguably more 'catchy' chorus sequences here than on either of the earlier full-lengths...

But it wouldn't be a Nuclear Assault record of the 80s without a number of stupid little vignettes that had no rhyme or reason to the remainder of the track list. One of these, "Funky Noise" is a splendidly retarded :50 second burst of funky guitars and horns, serving no purpose whatsoever except maybe to remind us that the band's got a 'lighter side'. That they're class clowns. Or that they're setting us up for Sacred Reich's abominable "31 Flavors" off The American Way ('don't just be a metal dude!', yeah, thanks, Einstein). The other is the :30 second "Mother's Day", a high velocity grinder in the tradition of "Hang the Pope". This one's certainly got the riffs to it, and the vocal patterns, while goofy and annoying, are curiously structured, but I still don't think it has a place alongside "Trail of Tears", "Search & Seizure", "Inherited Hell" and so forth.

There are also a number of tunes which sound like partial 'also rans' of others the band had already written. For instance, "When Freedom Cries" sports a nice chorus, but the verse rhythms seem predictable and generic even for its day, only slight reconfigurations of others on Game Over, Survive or earlier on this very anthem. "New Song" and "Critical Mass" seem the richest soil for ideas here, with such enormous neck breaking grooves that were bound to get a crowd moving; it's one of the better one two knockout combos you were likely to hear in 1989. "Trail of Tears" also had a great intro rhythm, but the bluesy meandering and clean guitars here seemed to drag on. Not the first usage of such in their career, but here you get just about everything you need to hear in the first 20-30 seconds and then wish they would just stick with the heavier momentum of the pure thrashing patterns. Other, less famous cuts like the bouncing fist baller "Torture Tactics" and the escalating, atmospheric romp "Surgery" are unsung heroes, even if they're not at the level of a "Brainwashed".

Handle With Care was the second album through which Nuclear Assault had worked with producer Randy Burns, and along with the engineers, they do a pretty smash up job of drawing forth that thicker guitar tone they had manifest for Survive. Both the vocals and guitars have a strong sense for melody here, not necessarily new to their sound but showing some signs that at their, core, the New Yorkers were just as concerned with memorable songwriting as raw aggression, and fully capable of balancing the contrasts. As such, many would probably view this as their peak in terms of studio quality, an opinion I cannot disagree with due to the excellent sense of variation and bold, straight to the face tone. But even though this is only a few minutes longer than the first two albums, it somehow feels a bit fatter, and I would have trimmed it down to just the best 8-9 songs and let them speak for themselves, skipping the shorts entirely.

That said, I don't have a lot of other complaints. Lyrically, the messages in the songs tackle fascism, abuse of authority and other prevalent social and political themes which carry weight yet today. I thought the cover was a bummer after the first two albums, and yet it too is the product of a pretty blunt message. I suppose we 'survived', and now Nuclear Assault was more concerned with our environmental awareness. Granted, this impetus conjures images of ex-cons picking trash of a highway more than the radioactivity and street fighting of past works, but at least the music itself maintains the thundering, bass heavy pit savvy the band had built into a science. Sadly, despite its relative success and penetration in the American and English markets, Handle With Care would prove the last of the band's albums of import. Doesn't feel quite so vital as its predecessors, and certainly I don't feel the same level of nostalgia for this, but it's still a great time.