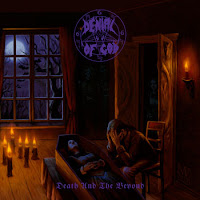 Considering their 21 year history, Danes Denial of God have had a rather quiet career, producing at first a long series of EPs through the 90s that eventually led up to some more substantial works in recent times. Death and the Beyond is only the band's second full-length album, but I've got to admit that I do enjoy the atmosphere and concept the band is attempting to manifest, if not so much the songwriting and execution. Like many bands of their ilk, there is the fascination with Satan and the occult, but they attempt to capture more of a supernatural horror feel through the album that brings about comparisons to acts like Mortuary Drape, Mercyful Fate, and King Diamond, even though the musical manifestation is quite different.

Quite liked the cover on this album, simple yet colorful and elegant, and the Gothic piano/vocal intro "Veni Spiritus" led me to believe that this would be quite a lot more atmospheric than it turned out. The band does implement pianos, synthesizers, and cleaner guitars to help break out the meatier riffing, but in general they play in a fairly minimal, subdued brand of black metal with a balance of slower, Celtic Frost-inspired grooves like you'll hear in "Funeral" and mid-paced, flowing rhythms with a hint of thrash ("The Cursed Chamber"). The production on the record is quite clean, especially the drums and guitar tone, so it makes for a smoother transition to the less metallic segues strewn about the track list, but it often leeches some of the riffs from a potential, rawer power that might have benefited their general lack of nuance and aggression. That said, Denial of God are no strangers to variation: they are not constantly repeating themselves here, fully capable of launching into a blasted rhythm with tremolo guitars in a total 90s fashion ("Behind the Coffin's Lid", the faster segments of "Black Dethe") or meting out an incorporeal interlude ("Spectral Lights").

The vocals are nothing out of the ordinary, almost like a thicker Satyr rasp but with a few deviations into the Gothic, solemn narrative I hinted at before. Death and the Beyond does suffer from some bloat, with a number of tunes exceeding 9 minutes and the grand finale, "Pendulum Swings" hitting 15. If the songs were actually creepier, or at least featured more malevolent passages interspersed with the dryer fare, then this would be easier to ingest, but too often here I felt that the guitars were uninspired and the little key melodies, which were often used to create a morbid lullaby, just went nowhere. Ultimately, my frustration with this album stemmed from the fact that, while I dig what the Danes are trying to achieve, the actual music does not live up to the breathtaking, ghostly theme, and I found myself admiring the more spacious, atmospheric segues as in "Bones turn to Dust" than the actual metal content. This is by no means an unpleasant or bad record, but it doesn't possess the thrills and chills I expected when looking upon it.