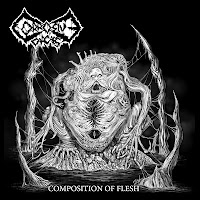 I must state up front that I've got a little bit of a bias towards the sound of an album like Composition of Flesh, because it seems as if these Swedes sat down with me and probed my brain to discern exactly what I'm seeking in an 'old school' death metal record. Like being examined by the mental health board at the looney bin. Upon first exposure to the guitar tone, I was a little worried that we'd be getting another direct bite off Entombed, Dismember and their countrymen, a trait I and many others have likely grown some 'fatigue' over, but that turns out not to be the case. While the raw level of putrid distortion might in fact draw a degree of inspiration from Corrosive Carcass' national forebears, they clearly bastardize the aesthetic with elements of US veterans Autopsy, Obituary and (early) Death, with some archaic Finnish sounds (Demilich, etc). The result is nothing short of an all-purpose, dynamic descent into the umpteenth layer of horror.

Composition of Flesh fires on all bony cylinders, strong songwriting skills enshrouded in a tumescent state of eternal darkness. While the band is certainly sniffing along a breadcrumb trail of nostalgia, I never had any sense that they were 'limiting' themselves to any particular palette of necrosis. They incorporate blasting, grooves, and mid-paced rhythmic variation without ever dropping the ball, and they can harry the listener into rapt, fearful attention throughout the entire 41 minutes and 13 tracks of the experience. Deep, dual rhythm guitars grind like a pestle in a mortar of flesh, while the leads are eerie, atmospheric, and never indulgent to the point that they exceed their welcome. The bass feels like a depth charge riddled with beefy distortion, and the drums, while strong, are set at a level which supports the voluminous axe-work. On top of this, you've got a damned solid vocalist in J. Sjöblom whose inflection falls somewhere between a Chris Reifert and L-G Petrov in style. He barks, he growls, he sounds like a pack of hell hounds and pit fiends melted into the psyche of a mortician drunk on formaldehyde fumes.

Lyrically, the band is deceptively simplistic, but I found myself really drawn into the perspective of tracks like the serial killer hymn "Twist of a Knife" or visceral and suicidal "Self Mutilation". Nothing novel as far as the imagery being described, but they certainly evoke an ardent sense of psychosis that matches well with the riffing architecture. Speaking of which, while I can't award points here for much originality, but the Swedes function exceedingly well within the parameters they've established. A few guitar progressions, in particular some of the tremolo sequences, are admittedly generic, but in general I feel like they know how to mix up the selection and keep the listener's focus, whether on a brief burst like "Avatar" or the more extensive finale "The End of Us All", which is close to 8 minutes. There are some amazing moments of atmosphere like the moody intro to "Collector" with its numbing bass and creepy, cleaner guitars, and I would have loved if the band could have more evenly dispersed these through the track list, but otherwise its spot-fucking-on infectious. Combine with the sheen of opaque, drudging production and wallow in the album's gore soaked oblivion. It seems we've been spoiled this year with all manner of fantastic retro death metal recordings, and you can add to this the stockpile of Horrendous, Necrovation and Binah on your next sepulchral excursion.