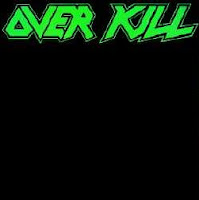 In retrospect, fate has not been the kindest to the original, eponymous Overkill EP released in 1984, but then one must recognize that it's no more than a demo recording later pressed as an 'official' issue. Three of the four tracks available here would be later recorded for the first two, classic full-length records, and the entire EP is reprinted on the !!!Fuck You!!! and Then Some compilation which came out in 1996. Tracking down an original copy of this thing is undoubtedly a dire prospect which is best reserved for wheelers, dealers and collectors, so most fans today  will have heard it alongside the 1988 Fuck You EP, and probably after they already heard the constituent tracks on Feel the Fire and Taking Over in all their brazen, hostile glory...

To put it into a proper perspective though, Overkill was admittedly a fairly bad ass introduction to one of the East Coast's longest enduring thrash bands. One of the East Coast's longest enduring metal bands, period. It features two of what I'd consider the group's greatest ever tracks in "Fatal if Swallowed" and "Rotten to the Core", and it arrived early enough in the scheme of its sub-genre's evolution that it certainly deserves a cult respect. That said, every time I come back to visit it, I can't help but feel my time would be better spent listening to the later recordings of the material. The group's youthful, hostile energy is coursing through all the important tunes, and it's no wonder why they were able to shortly pick up a deal through Megaforce and Atlantic; but the production, while still clear enough to deliver each riff and chorus with appreciable impact, leaves something to be desired. Not that Feel the Fire was all that amazing in this department, but the recordings of "Overkill" and "Rotten to the Core" there remain the 'default' renditions as far as it concerns my own listening habits.

Then there's the fact that "The Answer" is just not one of their best songs. It's a bloated, 9 minute 'epic' coursing along at a doomed pace, heavily inspired by Black Sabbath where the faster tracks cull more of a Judas Priest/Iron Maiden aesthetic gone street lethal. Many listeners in the late 80s, 90s or 'oughts always seemed to mention how the band would tear off into tangents involving more groove or doom elements, but in truth the band has always played this hand as both a tribute to one of its influences and to help vary the pacing of their records. "The Answer" is perhaps the early example of this, but despite the fact that Blitz' charismatic inflection lends itself well to the more ominous, sluggish walls of riffing, the actual architecture of the guitars is quite predictable and dull to carry 9 minutes. There's a pretty good reason this was left off the ensuing full-lengths, for at best it would have been mildly curious filler which wears out its welcome after about 2-3 minutes...

Elsewhere, though, the EP was certainly a cause for some excitement. The guitar tone is choppy and not quite as bold as I'd have liked, but then that wasn't destined to happen until Taking Over. Also I felt like there was a lot of nuance in the vocals on the later versions, where here he seems more shouty. The actual patterns are largely identical, and he pulls off some nice screams, but Feel the Fire is far stronger in terms of his delivery. And that's sort of how I feel about this recording in general. Important for its formative value, but easily supplanted by the full-lengths throughout the 80s, and "The Answer" providing the only tangible exclusivity here is hardly a boon, especially as it represents about a third of the content. However, if you're a total sucker for primitive recordings or you don't wish to acknowledge the existence of metal music beyond the mid-80s, I cannot say that Overkill's bound to disappoint you.