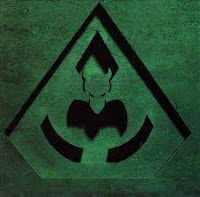 The Killing Kind represented another shuffling of the deck for the Overkill roster, bringing in ex-Anvil guitarist Sebastian Marino, and perhaps more surprisingly, ex-Liege Lord screamer Joe Comeau, to replace Merritt Gant and Rob Cannavino. Both had been playing in a local New York power metal act called Ramrod, which is possibly where the connection was made with the 'kill, and with them comes a more muscular sense of percussive rhythm, one of The Killing Kind's most distinguishing features. This is also an album in which Bobby Blitz decided to go entirely over the top, bat shit crazy, and thus the vocal and lyrical patterns here are a lot more fun than the two previous albums, even if they're not exactly brain-searing memorable.

Throughout the 90s, the Overkill crowd was largely a curious mix of remnant heshers, hardcore fans, bikers and punks, and I think this album definitely plays to a 'tough guy' personality more than its predecessors, but as far as the songwriting is concerned, the content is decidedly varied. You've got the more groove-oriented mid-paced sequences in opener "Battle", "Bold Face Pagan Stomp", "The Cleansing" or "Cold, Hard Fact"; the atmospheric, dark ballads like "The Morning After / Private Bleeding" or the far more interestingly structured "Burn You Down/To Ashes" with its moody bass and eerie clean guitars; and then some testicle-kicking, hi-octane 80s thrash in the form of "God-Like" which I frankly wish there were more of. Sadly, not a lot of these songs have ever really stuck with me. I purchased the album, spun it a few times and then gladly designated it to the dusty CD rack, with nary an urge to break it out and pummel along to it; but that doesn't take away from its well-rounded, dynamic flow of fisticuffs.

I also feel as if The Killing Kind proved another natural evolutionary step towards modernity, perhaps the first of significance since The Years of Decay. Prior recordings had some punch and heft to them, but this felt like it was truly structured to thrust the band back into the spotlight they had skirted with the early records. The drums here sound great, Mallare's fills and change-ups driving a lot of the almost tribal subtext of the songs, while Blitz is fucking everywhere, supplementing his rabid, impish inflection with everything from quirky rhythmic effects, call and response and even some creepy chanting in the bridge of "God-Like". Both Comeau and Marino are solid lead-smiths, and as they zip back and forth they never lose momentum, plus most importantly: the flesh of the rhythm guitars on this record seem to finally have found equal footing with D.D. Verni's acrobatic bass lines, and thus The Killing Kind maintains a refreshing equilibrium.

In the end though, the level of polish to this record is not enough to earn it high accolades, nor would I ever consider it one of the more successful outings in the Overkill canon. As barked and belligerent as the vocals get through the record, the chorus passages don't have the same staying power as many the band wrote for the 80s, and I'm not feeling the inherent bounciness of a lot of the grooves. Even when they're played at a higher speed or a set-up for a more complex pattern, songs like "Battle" are admittedly vapid and sound like little effort was placed in anything other than getting the studio levels right. The lyrics are also pretty bad here, played more for phonetic thrills than gravitas. The cover of the album is truly one of their most boring, I liked the icon as it was presented on W.F.O. but this comes off like a cheap computer graphic, not nearly so poignant as it might have. Overall, this is better than the two leading up to it, and if you're curious to hear a blend of say...80s Overkill/Metallica with Machine Head, then it strikes the right matches, but the wind of ages quickly snuffs them from the memory.