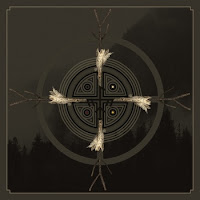 The strength of Seattle's Blood of the Black Owl has always been its cultural novelty, hypnotic architecture and strong sense of theme and place, qualities unbroken by their latest full-length Light the Fires! Perfect atmosphere for either sunset or smokehouse, their songwriting represents more of a thorough, ritualistic transcendence more so than a gathering of riffs and melodies, and thus it's placed well outside of the traditional extreme metal realm, despite the band's incorporation of black and doom elements, which admittedly do not play a huge role here until the latter half of the track order. Spiritual, vacuous, droning and at times haunting, you're not like to hear much else like it out there, and even if it doesn't evolve heavily from the sounds of its predecessors, the increase in production values and the sheer escape invested in its architecture ensure its worthiness.

No strangers to duration, Light the Fires! clocks in at close to 75 minutes, eschewing the shorter, singular track format of A Banishing Ritual (2010) for a return to the staggering length of the first two records. Normally, I'd scoff at such swollen content, but in the case of Blood of the Black Owl, it's rather essential as they slowly unravel the oppressive walls of modern existence surrounding you and conjure you back to times of ritual, a communal interface with the natural and metaphysical. A pagan, auditory altar. I rather enjoyed the progression here, through the more ambient-focused tracks that represent the first 30+ minutes of material to the darker, sluggish and funereal turbulence of "Sundrojan" and "Soil Magicians". Numerous emotional climes are explored, from mystery to misery and back again, often beautiful despite themselves and the band's intentions to suck the black vapors from the listener's soul and devour them with droning confidence.

Instrumentally, the band explores a broad swath of sound, from modest acoustic guitars and ambient wailing to tribal or ringing percussion, from bird call-like, fluting tones and rattles to organs. The vocals are just as distinct and diverse, cycling through passages of deep, introspective chant ("Caller of Spirits") to folkish psychedelia circa Pink Floyd ("Rise and Shine"), to grisly, epic charnel growls devoid of warmth on the heaving, black/doom material. In particular, I rather like how they double up the extreme vocals with a more solemn, clean timbre (as in "Sundrojan") to create these moving, morose vistas. One particular favorite here, "Soil Magicians" evolves from soothing pipes, whispers and stream samples into this crushing sequence of fuzzy downcast doom and discord which rattled my ghost to its very foundations, and I might add that this was over the space of over 13 minutes...not an easy task to pull off without numbing or exhausting the listener, and such basal and simplistic guitar progressions you might expect on an old Pentagram or Cathedral record.

This is far clearer sounding than the past albums, with brighter tones to the ambient/ritual sequences and a more gut-wrenching swell to the distorted guitars, and in truth it might prove an easier point of entry for newcomers wishing to delve into the project's unique sound. That said, the writing doesn't quite take the veteran listener by surprise with the same level of nuance and novelty it once did. The sound palette is better expressed, but the tectonic shifting of the band's stylistic contrasts doesn't reveal much surprise. In particular I'd like to hear the band weave in some faster material, whether it manifest in sheer percussive rage or a more psychedelic freakout using organs, flutes or guitars. Not the normal modus operandi for a metal band that favors such drawn out compositions, I realize, but Blood of the Black Owl is far more than a typical funeral doom band, and a little added aural anarchy wouldn't hurt them. All told, though, Light the Fires! is another captivating experience, unlikely to turn away fans of A Feral Spirit or the s/t debut.