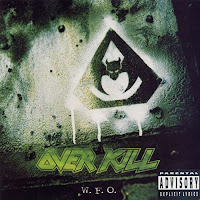 Gods know acronyms were never in short supply in the thrash metal scene, but the motorcycling term W.F.O. (for 'Wide Fuckin' Open') seems wildly appropriately for the tension and release Overkill had expressed in their best years. Naturally, with the title and songs like "Fast Junkie" on the track list, I had some anticipation that the band would be returning to the no-nonsense, infectious thrashing present on their formative displays of power, but the best I can really say for this record is that the band had gone 'green' again, whipped up a pretty sweet icon for Chaly which would look good spray-painted on any vehicle or guitar case, and taken I Hear Black out to the back alley and put it out of its misery. A proper mercy killing.

In spirit, W.F.O. definitely falls in line with earlier records like Taking Over and Under the Influence, but the music is unfortunately not up to snuff with earlier compositions. This is often considered another album in their 'groove metal' phase, but for the most part that just manifests in similar, rock-fueled riffs delivered at a meaty, thrashing pace. It's definitely pretty 'street' and tough guy, and one still draws the impression that the band were beefing themselves up to perform in a world alongside dominant 90s groove and nu-thrash staples like Machine Head or Pantera, but I'd hardly consider this as lame or offensive as Sepultura's Roots or similar tripe. W.F.O. consists primarily of straight thrashing tracks redolent of 1988-mid 90s' Anthrax, with a few hints of Metallica's percussive riffing circa Master of Puppets or ...And Justice For All. The riffs are admittedly quite simplistic throughout the track list, but in all honesty there are moments which, in retrospect, deliver all the charm and power of more modern, popular 'comeback' albums like Ironbound.

This was the second full-length with this particular lineup, and you could feel the confidence grow over the rather timid and uninspired I Hear Black. The riffs punch harder, with some more surgical riffing cutting through the rhythm guitars in cuts like "They Eat Their Young" or "Bastard Nation", and a bit of the band's punk influence is recaptured with the driving "Supersonic Hate". D.D. Verni's tone is officious in this mix, so puerile and prominent that it often distracts from the guitar with its very Anthrax-like pacing, and there is more than one point on this recording where I felt like I had been catapulted into State of Euphoria, with the often enthusiastic impetus in the note progressions. The drums feel polished but a little dry, there isn't much depth created through the fills and the kick and snare really needed some more power or reverb. As for Blitz, he's pretty charming here as usual, that beady, arsonist gleam in his eye translating to each scream and chorus, but I wouldn't say this is one of his more memorable performances. Explosive, not enduring.

I was somewhat worried that Overkill were going to just go all out bluesy-metal here and continue to draw heavily upon the Sabbath influence they've expressed in the past, so I was happily surprised that this was for the most part pretty upbeat. There are some slower grooves, often created by Verni's bobbing brickwork rhythms, but they almost always pick up the pace to better reflect the album's title. Thrash was quite the dead scene in 1994, a few stalwarts pressing on but the rest having transformed for the current market, so I can hardly fault the New Jersey/Yorkers for keeping it real. The problem is that this music feels like a sheet of bubble wrap. Fun to pop for 5-10 minutes, but the attention is quickly drawn elsewhere. None of the immortal craftsmanship of Under the Influence of Taking Over. No standout riffs or leads, just blue collar, functional bruising. At the same time, none of the tracks are exactly shit either: I could live without the banal acoustic interlude "R.I.P. (Undone)" or the 'hidden' cover jam at the end, but the core selection of songs stick with the program, though this program hardly reaps in a higher Nielsen rating.