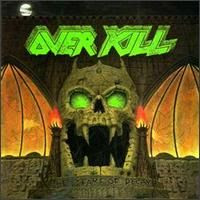 Though I used to love the title of Overkill's fourth record when it was first released, and bought it day one at the mall, it's difficult not to look back at is as eerily prophetic of the material they'd excrete over the ensuing decades. Not that the New Yorkers ever stumbled as hard as the more popular Californian speed/thrash royalty like Metallica, Slayer and Megadeth, but there was this span of decades where the band was just not capitalizing on the promise of the first few albums, and it became a tiresome process to behold, especially when one compares it to their generally electrifying live gigs that have always been a pleasure to experience. For studio records, usually you could rely on about 1-2 decent tracks at most, and the rest to creep in and out of your memory like the sewer water Chaly was vaporizing on Under the Influence.

The Years of Decay was still a decent album, though, arriving right around the climax of the thrash genre (though some would argue it was years earlier than 1989), but it was sadly outclassed by a large swath of the field. The production here threw up a few red flags for me immediately, sounding even more constipated, sterile and processed than even Under the Influence had. Sure, the album LOOKS good, a leering and classy interpretation of their mascot character (and far from the last), but audibly it's inconsistent. The punchy tone applied to the guitars might seem adequate for neck jerking and moshing, but its very quickly outshone by the screaming of the vocals or the dextrous and popping bass lines, so that when a truly standout riff comes along like the clinical and chilling pre-verse pattern of "Nothing to Die For", I would always wonder why so many of the other tunes fell short. Granted, Overkill was a major label band trying with no qualms about modernizing itself, but there were quite a number of dull riffs throughout The Years of Decay which left a lot of the weight of its success on the shoulders of Bobby Blitz.

At the same time, this was an album where they felt comfortable enough to 'experiment' a little further than they had in the past. Thus the incorporation of tunes like the titular power ballad, featuring entire acoustic guitar verses and Blitz showing us his woozy emotional range (which admittedly isn't bad); or the entirely too dull Sabbath-doom opening moments of "Playing With Spiders/Skullkrusher", boasting one of the most boring and generic riffs you could have asked for in that particular niche, and a pretty lame and predictable bluesy/doom flow to the lyrics. Not the first time the band would play around in that particular sandbox, and they would again at least a dozen times on later efforts, but I must say that Overkill have never been very good at it. This group shines when they're rifling along at an energetic speed and Blitz is spitting vitriol at a thousand miles an hour, not when trudging along with effortless slow riffs that any awful bar band could conceive of in roughly 2 minutes. Fuck that noise. And while I admire that Blitz found a proving grounds here to flex his pipes towards a grand climax, "The Years of Decay" is littered with weak leads and wimpy metal riff patterns that don't really deserve the eventual chorus.

All this becomes dreadfully apparent at the presence of a song like "Elimination", which was precisely the Overkill I wanted! Thuggish testosterone riffing, freak ass lyrical patterns that fire off like psychotic ballistics and sound like they were amazingly fun to lay down in the studio, and a chorus that almost every other track on this record only wishes it could match. "I Hate" is another entertaining piece with lyrics a lot of thrashers could relate to, with a nice Maiden-esque intro riff, and then a heavy punk influence in the chorus riff and bridge, so it's no surprise to me that these are the most remembered here. Another song I quite enjoyed here was "E.vil N.ever D.ies", its charging and chugging guitars sounding like the bastard children of Master of Puppets, but also some great and ominous bass lines, spooky guitar melodies and a great chorus (recanting the once-clever title) overcome some of the weaker riffs. Otherwise, songs like "Birth of Tension" and "Time to Kill" have some nice ideas but just aren't consistently well written, and "Who Tends the Fire" could join "Skullkrusher" and the title track on the pyre for all I care (a fairly sizable, almost 30 minute chunk of the album).

A friend once summed this record up as 'The Black Album' of Overkill, but I think that honor is better bestowed on one of the later 90s works. This is more or less 50% pure thrashing abandon in the vein of its predecessor, with a few stabs at some dynamic variation. Some people truly love it, and it makes sense that the group would wanna send out some feelers into other terrain and broaden the baseline songwriting, I only wish they had done a better job of it, and the aural aesthetics of the CD have never sounded good to me in headphones, car speakers, stereo. That aside, it's not without some strong points. For one, I think Falck's drumming here was a step above Under the Influence, and I would be lying to deny that a few of their best songs exist in "I Hate" and "Elimination", anthems that stand alongside "Rotten to the Core", "Wrecking Crew" and "Hello from the Gutter" as iconic. Was definitely the last 'good' Overkill for some time, but it's never been a personal favorite of mine and I struggle to listen through the whole of it almost 20+ years later.