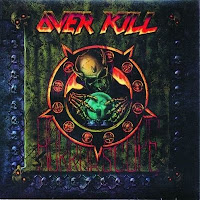 As I was preparing these past few weeks to forge through my Overkill CD collection chronologically, it dawned on me that The Years of Decay was some sort of psychic cut-off point, and that its successor Horrorscope was the first of the band's studio full-lengths that I really struggled to remember, a trait that effectively mirrors the quality of the songwriting here. It's not that this is a 'bad' effort, by any means, but apart from the flaming orange mutation of the logo and the Edgar Winter cover ("Frankenstein"), this has always struck me as a painfully average thrash record which fails to provide the incendiary architecture of the band's biggest hits. Granted, I felt that they were on a steady if slight decline for the few records leading to this from Taking Over, but even then there were songs like "Elimination" and "Hello the Gutter" which stood out. When asked to name an equivocal piece on Horrorscope, I'm afraid I draw blanks, even after revisiting the album several times...

It may or may not have something to do with the fact that this is the first post-Gustafson Overkill album, the band's formative and formidable axeman having left the group in 1990 due to tension in the ranks (there are various sides to the story). Apparently D.D. Verni and Bobby Ellsworth had been pining for years to bulk up to two guitar players, so here was their opportunity, recruiting Rob Cannavino and Merritt Gant, two guys that seemed to have visualized out of thin air, but fit Overkill's modus operandi accordingly with taut and blistering rhythm and lead techniques. In fact, the one aspect in which I feel Horrorscope does actually dominate its predecessor is in the sheer production, which for me seems a little less over polished while retaining the punch and modernity the band were teasing with Years. Quite probably the byproduct of working with Terry Date this time out instead of Alex Perialas. The drums still feel aggressive, snappy and clean, Falck matching his prior performances, but the vocals, bass and guitar seem to be better unified into one pulverizing whole, and the album benefits from its explosive balance.

Unfortunately, so many of the songs here fail to provoke the same violent and impish nature of their forebears from Taking Over and Feel the Fire. The style here is still largely speed/thrash, with a few passing nods to the doom they had flirted with on "The Answer" or "Skullkrusher", so they deserve some credit for keeping it real when even Metallica was starting to shift climates with The Black Album, but this doesn't necessarily translate into quality riffs and vocal lines, both of which are absent from the majority of Horrorscope. It might just be that I'm not feeling D.D. Verni's writing. Both the production and business of the guitar riffs in songs like "Blood Money" felt somewhat similar to Pantera's seminal Cowboys from Hell. The obviously horror influenced intros a song like "Bare Bones" (with the piano) felt like bland John Carpenter worship, while the clean guitar that leads off the album on "Coma" reminds me of Anthrax for some reason.

The band wasn't lacking for pure headbanging frills here. "Blood Money", "Thanks for Nothing" and "New Machine" all scratch that itch to some extent, while tunes like "Nice Day...for a Funeral" or the escalating power ballad "Soulitude" have slower, moodier moments which maintain the level of variation from The Years of Decay. But nothing sticks. The vocal lines don't seem nearly as scathing or interestingly pitched as on prior efforts, and the leads all zip into one ear and out another faster than I can remember them. I thought the "Frankenstein" cover was burning and robust enough to do the original service, but then it's little more than a metal injection to an already rocking song, and thus the aggression doesn't even feel all that dialed up even with the chugging mid-paced thrash break that arrives after the first groove sequence.

All told, it's hard not to feel my old 'curse of 1991' pervade this album as it did for many others that seem to be universally well-regarded but personally uninteresting, like Arise, Human or Blessed Are the Sick, all of which likewise hailed from bands whose prior output I had loved. A curious phenomena which I've gone back to debunk and examine for decades, only to end up reinforcing my underwhelmed reaction. There's nothing inherently terrible about Horroscope, it's a competent and dynamic enough successor to The Years of Decay, but it seems further molded towards mediocrity, and there just aren't any exciting rhythm guitars or chorus bits that inspire the violence inside me as "Rotten to the Core", "Fatal if Swallowed" or "Electro-Violence" always have. Yes, it's 'mature', and well produced, but neither is necessarily a mandate where it concerns myself and Overkill.

Verdict: Indifference [6.5/10] (standing in the middle of nowhere)