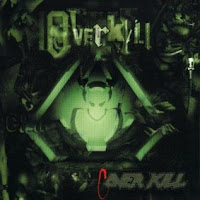 Complete cover albums like this one always run the risk of coming across as more of a tribute to the band's own open mindedness than the bands they cover, and by this I mean they'll usually keep the revisions as close to the original works as possible. In the case of Overkill, the 'cleverly' titled Coverkill goes a little beyond this, making the songs feel more or less like they belong in your average set tucked in between an "Elimination" or "Wrecking Crew". In other words, the selections made for this album feel natural to the band, and won't surprise anyone who followed them through their career, but they don't often deviate from the sources beyond the distinct delivery of Bobby Blitz.

This is especially the case for the numerous punk tributes here, like "No Feelings" (Sex Pistols), "I'm Against It" (Ramones) and "Ain't Nothin' to Do" (Dead Boys), which are dowsed in more muscular guitars than their originals, meatier thrash muting, but in translation lose a lot of their uniqueness and character in this polished and metalized state. The actual metal cuts the band visits are better, because they were simply superior songs to begin with. Obviously they took on the Motörhead tune from which they derived their band's name, and do a fair job by it (as the album intro), but I thought the rendition of "Tyrant" Judas Priest was appreciably wild, Blitz one of the few singers period with enough of a unique personality to stand in Halford's shadow. The inclusion of "Death Tone" by Manowar, was more unexpected, and fun due to the nasty slice of the vocals in the chorus.

Black Sabbath is given a hat trick treatment, no surprise since the UK doom gods have been a direct and overwhelming influence on a number of Overkill's past experiments, but to their credit, they varied up the choices so you have the slower doom of "Cornucopia" with a broad, raw guitar tone; the more uplifting 'eavy metal escalation of "Never Say Die", with an atmospheric performance from Blitz, and the softer rock and roll of "Changes", which I found the least impressive of this lot. Probably the most impressive cover on the whole album is Jethro Tull's "Hymn 43", which becomes a mighty, wonderfully produced, groove force of nature in the New Yorkers' hands, and if only the rest of the track list was performed at this level I'd have liked it much more. Deep Purple's "Space Truckin'" is also pretty sweet.

Nothing feels out of place here, so don't expect one of the more eclectic selections of this sort, with pop, dance or disco tunes transformed into metallic oddities (I'm lookin' at you, Helloween). Coverkill is consistent, safe and workmanlike, drawing largely from the spectrum you'd predict. Only a few of the tunes are brought up to a level of heaviness equivocal to their better originals (Motörhead in particular), but I'm not going to lie: this was a more entertaining use of my time than their mediocre new studio album, Necroshine which was also put out the same year. These covers feel like a more convincing, inspired kick in the ass, even if the mix is slightly more varied and less focused. Not a mandatory purchase by any means, but if you see it in a bargain bin for a few bucks it might earn a few spins on a road trip.