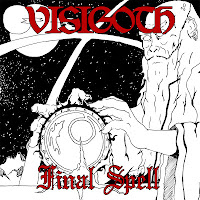 Salt Lake City is not the first place that comes to mind when one thinks of melodic heavy metal, so it's no shocker that Visigoth carry a more European feel to their songwriting on the Final Spell EP, a follow-up to their 2010 demo. In particular, as I was listening through its four tracks, I was picking up a distinctly Swedish vibe reminiscent of Dream Evil, HammerFall, Nocturnal Rites, The Storyteller or Heed. This is largely in part to the incredibly polished vocal production, but also the songwriting itself which relies heavy on traditional, simpler riffing patterns skirted with glorious threads of melody. The structure is certainly redolent of prototype power metal acts like Accept, Running Wild ("Call of the Road"), Judas Priest or the Dio solo records of the 90s, but the band is fortunate not to draw upon any one influence too closely, and their geographical placement incurs a sense of novelty.

The caveat is that Visigoth create a more modern aural context to their music than merely aping the decades past, and this is manifest primarily through the meat of the guitar tone. Most of the songs here are played at a mid gait, with lots of chugging balanced against the more melodic chords and lead lines; the band just settles into the rocking and lets Jake Rogers build atmosphere through the vocal textures, which are smooth and boldly mixed to the point that they almost drown out some of the guitars during the huge harmonies. What's amusing is that this is the same guy behind the black metal group Gallowbraid. He's obviously a long way from the retching and snarling we experienced there, but to his credit he's got a very seasoned, professional timbre that you'd expect from more storied singers. If I had any problems vocally, it had less to do with his ability and more to do with the lack of aggression. He doesn't scream, he doesn't necessarily wrench a lot of character from his chosen range; there are certainly emotions at work, and the chorus sequences are clear, accessible, and easy for crowds to sing along with, but I, for one, would not mind if he got a little angrier.

Otherwise, this is a pretty on-point demo. Visigoth knows its audience. All of the songs hover at around the same 5+ minute range, and the riffs are kept busy enough that they eschew the sense of ennui the standard, hard rock four note configurations that plague a lot of the lower-intensity heavy/power hybrids. Songs like "Final Spell" and "Creature of Desire" might seem slightly predictable, but they fill the space with speed metal licks, taut and effective leads, and the Rock'n'Rolf temerity of the rhythm guitars definitely makes me wish I were licensed to drive a motorcycle. I also like the moodier breakdowns with cleaner guitars which lent a Maiden-esque dynamic (as in "Final Spell"). The one track of the four I struggled with the most was "Seven Golden Ships". It opens with a large, chugging guitar passage but sort of peters out in intensity, until the burst of speed and melody in the bridge which is possibly one of the most sticky rhythms among the 22 minutes of material, but stylistically it remained consistent with its neighbors.

Lyrically, there might be of the few of the familiar post-Manowar cliches, but usually this is not a problem for most of the fan base of this genre, and who am I kidding? When you include lines like 'titanic war machine' I'm hardly one to complain. Some might scoff at the cover art, but I rather dig the simplicity, as a huge admirer of old sword & sorcery fiction and comic book art. No, probably the only serious setbacks for me was that it often felt a little too passive or paint-by-numbers, and the vocals were a fraction loud. I want this band to do unto me like the Germanic tribe it was name for did to the Roman troops at Adrianople, so it wouldn't hurt to ramp up the savagery, something that will undoubtedly manifest with the extended variation of a longer form recording. Beyond that, though, Final Spell is a coherent, neat sounding, and above all professional sampler with a fluid rhythm section, chops and melodies aplenty, and not so stuck in the trail of its influences that it can't pull its boots out of the muck and forge ahead on its own path.