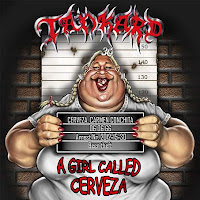 I like my Tankard records as I like my women: very German, and voluptuous to overflowing, two traits shared by their latest inebriated adventure and 16th full-length studio album, A Girl Called Cerveza. While its title and cover image are likely to offend their share of the Planet Butthurt citizenry (not at all the intention), they're really nothing out of the ordinary, a celebration of beer soaked celluloid and goofiness that has defined the group for better or worse now since the 80s, and not something one should conspire to take seriously on any day of the calendar. On the other hand, the music itself is quite well composed here, boasting superb production and strong enough variation to survive a good number of replays, even if it shouldn't be counted among their best work.

A Girl Called Cerveza bears some semblance to the band's 2006 effort The Beauty and the Beer, which was my favorite of their releases since their prime in the 80s, before the band's 'gimmick' arguable fled South and they started bouncing back and forth between quality and mediocrity. While the band picks up the pace and levels some devastating thrash redolent of their glory years in "Witchhunt 2.0" or the title track, it's not nearly so dirty, manic or explosive as, say, The Morning After. Like The Beauty and the Beer, the band have incorporated a lot of straight up heavy metal or Germanic power metal elements: dual melodies and riffs reminiscent of bands like Accept, Running Wild, Iron Maiden and Omen are contrasted against the harsher, wretched inflection of Andreas 'Gerre' Geremia, who hasn't lost a damned fraction of his charisma in 30 years of drunken belligerence. Like other German front persons Schmier, Tom Angelripper or Sabina Classen, the guy is instantly distinguishable from the legions of charmless retro thrashers peddling yesteryear's news from unpopulated newsstands; tons of edge to his timbre, but just enough melody to carry off all the choruses and compensate for the intentional, often laughably retarded ("Son of a Fridge" had me in stitches) lyrics...

...which as usual, are not all about beer 100% of the time, and this is how Tankard have managed to avoid wearing themselves thin through these many years. No, instead of unanimously swilling from the pilsner glass on every track here, they tackle subjects ranging from a more serious political rage in "Rapid Fire (A Tyrant's Elegy)" to an eyebrow raising tribute to Thailand ("The Metal Lady Boy"). Fortunately, the music packs a lot of punch, Andy Gutjarh truly having settled into his role long ago, riffing all over the place and showing solid dynamic inclinations and effective lead work from his traditional metal influences. This is hardly the most 'mosh' oriented thrash recorded, it's not loaded with many palm muted chug fests circa "Toxic Waltz" or other standards, but more of a brash and testosterone fueled mesh of power and thrash that becomes unique under Gerre's trash talking tutelage, and that's perfectly acceptable as far as I'm concerned, because the bold clarity and muscular depth of the guitar tone and vocal mix sounds fantastic here as it has for a number of albums leading up to it. Few thrash bands have production at this level, and yet despite its level of polish, it somehow doesn't betray the frolicking spirit which has existed at the core of this band since '86.

I could give or take the duet with Doro Pesch in "The Metal Lady Boy", or the clean guitars used to intro pieces like "Son of a Fridge", but I had a genuinely fun time listening through this record, even if it's not the sort of quality I'm likely to turn towards for the next 25 years (i.e. Zombie Attack, The Morning After). The songs are well structured across varied paces, a few of the riffing sequences really get the fists flying and the taps emptied, and in summation it all sounds like a band who have aged VERY FUCKING well, which you'll note is a pretty common trait among the German thrash acts (far less so for their Bay Area competition who so rarely mount an adequate jaunt 'back to the front'). Keep your expectations realistic, a mug of your favorite poison handy, and if possible, the company of a buxom admirer (male, female, tranny as your personal preference dictates), and you'll come away from A Girl Called Cerveza smiling more often than not. I'm not sure if a 'Prost!' or 'Salud!' is more appropriate here, so have 'em both you maggots.