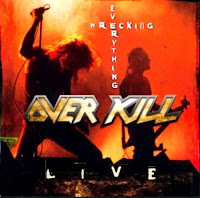 Overkill's second live record was recorded in their native New Jersey turf, and featured a more compact set on one disc that was released alongside a DVD version. By this point the band had an entirely new pair of guitarists, Dave Linsk who had come aboard a few years prior, and Derek 'The Skull' Tailer, a more recent addition, so they've still got that extra rhythm guitar as with the previous live released in 1995. All told, the better selections here are superior in sound to Wrecking Your Neck Live, but that's also the catch: to get there, you've gotta ford a number of lame bounce metal tracks from some of the band's mediocre records, and the general quality of chosen material throughout the 13 cuts cycles back and forth between classic and nearly intolerable.

"Necroshine" (from the 1999 album of the same name) and "Thunderhead" (off Bloodletting) are a pretty poor choice to kick off this order, and to be honest with you they sound even more like lame examples of throwaway 90s groove metal in the live setting than their studio counterparts. Boasting some of the most uninteresting chord progressions in the band's entire catalog, which belong more to any random Machine Head/Pantera jump da fuc up bar band than the black and green, they hardly breed much anticipation for what follows. Thankfully, Blitz' presence is cutting and focused enough that you can, with some level of perseverance, make it nearer the middle of the disc where songs like "I Hate", "Shred" and "Deny the" fuckin' "Cross" await your attention. Hilarious to me that these oldies sound so much tighter and driven than the newer material here; it's almost like the band just knows those are the money shots, and are shoveling the crap out of the way just to push a few records they're actually touring on at the merchandise table.

Still, not all the classics get a great treatment here. "E.vil N.ever D.ies" seems a little limp, "In Union We Stand" a bit dry and repetitious despite the fans' love and involvement, and every time I listen to this I almost blank out by the time the eponymous closer "Overkill" arrives. There's another sequence of newer material with a few From the Underground and Below Tracks ("Long Time Dyin'", "It Lives") which has its moments, and the rare performance of "The Years of Decay" is not too shabby (if you like the original), but ultimately "Deny the Cross" and "Shred" destroy every other song on this several times over, even the rest of the oldies, and it makes me wonder if placing "Electro-Violence", "Rotten to the Core", "Wrecking Crew" and a handful of other goodies in the set in place of....fucking "Battle" or the lamentable "Necroshine" would not have improved it?

Despite my disdain at a few of the set choices, though, Wrecking Everything Live at least sounds decent. You get all of Blitz' great banter between the performances, and the guy sounds great singing. The backing vocals are pathetic, from the overbearing grunts to the flimsier single lines, but the bass is incredibly full sounding and the guitars juicy and thick, a double-edged sword as it makes some of the banal grooves on the newer tunes sound even more goofy. I'm just faced, once again, with the plain fact that my fallout of interest in Overkill throughout the 90s renders another of their live albums 'not really for me', while I'm sure some dude in a wifebeater and who crushes beer cans on his forehead while hailing W.F.O. and Necroshine as the greatest thrash albums of the 20th century will get his money's worth. You win some, you lose some, I just wish I hadn't bought the season pass.