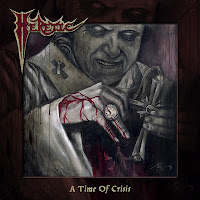 L.A.'s Heretic was a band cut well short of its time when the vocalist on its excellent Breaking Point album (in 1988) decided to take the bigger gig with Metal Church, replacing David Wayne. Funny enough, other Heretic members would later form Reverend with Wayne, exacting a sort of pseudo-revenge by releasing material that, at first, was superior to what the Howe Church managed to manifest. Granted, neither of the groups would ever match Breaking Point, in my opinion, so the few followers like myself were left to mourn another casualty of the 80s, one of the best US power/thrash hybrids to happen along in that mighty decade. Naturally, when I was met by news of a reunion and a new studio album through Metal on Metal Records, I was at once both excited and trepidatious: could they live up to their impressive legacy, or would they prove another victim of time lost?

I should point out that this is NOT a Heretic with Mike Howe singing or the entire Breaking Point lineup of musicians, but instead a reunion of guitarist Brian Korban with the earlier vocalist Julian Mendez who had been present for their Torture Knows No Boundaries EP (1986), which was not nearly so memorable, but decent enough power/trad metal for its time. Mendez had a pretty interesting contrast in his voice, between screeches and a grimier lower range, but the songs supporting him weren't entirely appealing, whereas the ensuing Breaking Point was a veritable riff-fest that played well to the moments of clean/acoustic atmosphere and the grating edge to Mike Howe's voice. The remainder of the lineup for this reunion is new to the band, but both bassist Angelo Espino and guitarist Glenn Rogers have a formidable history of involvements in groups as widespread as Hirax, Bitch, Vengeance Rising/Once Dead, Uncle Slam and even Reverend. So, not their first time at the dance, and their background in speed and thrash metal make them excellent choices to fill the shoes of alumni like Dennis O'Hara and Bobby Marquez.

With all of these changes, I'm satisfied to say that A Time of Crisis maintains a natural continuity with its predecessor Breaking Point, even though there are a few shifts in climate. You're still getting the simpler, well constructed songwriting and powerful riffs, only the emphasis here is a bit more on the crushing weight of the thrash elements, with an increased use of muted potency and even a few breakdown grooves that seem a better fit for how Mendez' vocals have evolved through the years. Here the guy has a much deeper overall inflection, with a lot of hoarse and strain on it, but while he might not pull out a scream as he once did, it works out well when he raises pitch to hit the chorus. Certainly the guy's voice is leaden, and carries well within the span of the riffing architecture, yet it does take a little use to getting used to unless you're a huge fan of the harsher power metal singers like Chris Boltendahl of Grave Digger, in which case you'll feel right at home (Mendez isn't nearly so gravelly, in fact).

Musically, there seems a parallel evolution towards what you might have heard on the latest Helstar album, or the past decade worth of Vicious Rumors releases. Traditional 80s metal influences like Judas Priest have their skeletons festooned with fat and muscle, and the beefy and heavy distorted guitar tone used by Korban and Rogers is applied with effective crunch. The songs possess a fair amount of variation, from the more upbeat power/thrash of "Tomorrow's Plague" or the soaring "Child of War" to the mid paced mosh brutes like "For Your Faith" and "Betrayed". The guitar progressions aren't all that fresh or innovative, but they're cleaved efficiently by the lead sequences and they mix up the central patterns with enough thrust and bombast that I was oft reminded me of Testament's airy underrated record The Ritual, which also strode the threshold between metallic sub-genres. Add to this a snap performance from the new drummer Iggy Coppola and you've got a well rounded comeback record that doesn't really disappoint.

A Time of Crisis is not without its flaws. I, for one, didn't care for the new version of the band's eponymous "Heretic", vastly preferring the Mike Howe version. The riffs are effective, but not the stickiest in terms of wanting to listen through them until your ears fall off. Also, as I mentioned, Mendez has a pretty unique voice that wasn't the easiest to adapt to up front. After a number of spins, though, I was happy that band managed a mild reinvention of their 80s sound without sounding trendy or trite, or resting too much on the laurels of their past. Fans of Vicious Rumors, Reverend, late 80s Metal Church and the newer albums by Meliah Rage will probably dig this, and even if it's not perfect, it's far from a disgrace to the Heretic brand.