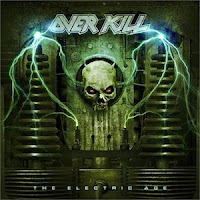 The unexpected success of Overkill's 2010 album Ironbound placed the band in a rather precarious position. Essentially the first record in many years to generate such a positive wave of buzz for the band, it arrived at just the point where thrash had gone completely viral with a number of retro acts culling the sounds of the 80s into modern production standards. A whole new generation of thrasher was inspired to jump aboard the Chaly express, and at the same time, many fans of the groups first 4-5 records who had long since abandoned them to the middling groove experiments that were so dominant in the 90s finally felt they could return to that Overkill they fell in love with. Personally, as someone from the latter camp, I found Ironbound to be a decent record, if nowhere near so exemplary as many had painted it. The lethal, youthful energy seemed to have repossessed Jersey's finest, and the songs were easily as strong as Killbox 13 (the one other post-80s Overkill album I was borderline into) but precious few of the actual songs justified such lavish praise.

But would it prove a fluke for Bobby 'Blitz' Ellsworth and company? Would they achieve their 15 minutes once more, then sink back into another decade or so of relative mediocrity? From the sounds of the follow up, The Electric Age, I can proudly say not a chance in hell, because not only does this record reassert the groups charismatic volatility in spades, but the more I listen through this the more it sticks with me. In fact, I already like it more than Ironbound, and have no problem declaring it their best studio full-length since Under the Influence in 1988. Yes, better than The Years of Decay. Or Horroscope. Even in the very dregs of this album, like the petulant chugfest "Old Wounds, New Scars" or the more boogie metal infused "21st Century Man", the personality of Blitz alone is enough to carry what otherwise might feel like a less inspired set of riffs. The pacing throughout is violent and dependable, the riffs feral and bombastic even when they're not memorable, and at least a dozen times here, you feel as if you've been run over by the band's tour bus as it patrols the city streets stalking new venues to destroy.

This is by far the best guitar tone they've achieved in a great many years, with plenty of bite to it that drops out wisely for the ferocious, warped lead-work, and both the muscled staccato chords and palm mutes sound brazen, with as much current as Chaly's electric wings on the cover. There are a few grooves I found rather bland and empty here or there, like the breakdown in "Electric Rattlesnake", but in general songs like "Wish You Were Dead" and "All Over But the Shouting" take you straight back to the 'powersurge' of the 80s and they're propulsive enough to blow over anything that many of the band's peers from the Golden Age are producing lately (like Exodus, for example). The bass lines are superior to about eight albums leading up to this one, Verni gunning alongside the guitars without flagellating over himself like some would say he used to in the late 80s alongside Gustafson's writing; and Ron Lipnicki makes a strong account for himself here, laying into the kit with a fury his predecessors like Mallare and Rat Skates could only muster on their very best outings in the band's catalog.

All of this pales in comparison to Bobby mother fucking Blitz, who reinstates himself here as that guy you don't want to lock horns with in a dark alleyway. The self-reflective chorus lines in tracks like "Old Wounds, New Scars" (Got a lot of mouth for a Jersey white boy/beat the drum, now you've gone too far) or "Wish You Were Dead (got me spinning in circles/hanging by a thread/if I had one wish to use, I swear it/I wish you were dead) truly get the listener's blood stirring and prompted for a fist fight with whoever is available, something I just couldn't have said for an Immortalis or ReliXIV. In truth, this is probably the strongest of his performances outside Feel the Fire and Taking Over, he comes off slightly more edgy and aggravated than even Ironbound, and considering just how crucial his delivery is to the success of an Overkill album...it's money in the bank.

Despite all this praise, and its numerous overt strengths, The Electric Age still falls shy of greatness by a slim margin I'd largely attribute to the riffing, which is strong enough to support Blitz and maintain the gnashing, abusive fire under the album's ass, but not really all that distinct when broken down to individual patterns and progressions. Pacing and structure trump quality. There aren't any that I wanted to learn on my guitar once the smoke cleared. For fans old and new, it's likely money well spent, but while it's clearly got some replay power, I'm not sure how long it can endure, or if I'll care for songs like "Come and Get It" in another 3-5 years. The post-80s Overkill masterpiece still seems to elude me (though I realize I'm in the minority with all the gushing over Ironbound), but this certainly edges them in the proper direction, and there are least 30-40 minutes here of solid headbanging frenzy driven by THE VOICE.