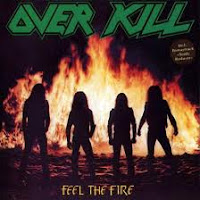 Perhaps one of the most appropriate soundtracks for a preteen waiting for his balls to fully drop, Feel the Fire was mine own introduction into the realm of the New York/New Jersey's incendiary Overkill, and after 25 years of nearly constant annual touring and studio productivity, it remains one their most poignant and effective statements. And, strangely enough, not a day fucking older sounding than when I first listened to it. Granted, this wasn't a unique trait for the classic recordings of the 80s and their timeless, tireless, youthful vitality, but I'd also add that this might just be my favorite singular performance by Bobby 'Blitz' Ellsworth in the band's entire career. That's not to say that the 'whole package' here is necessarily a match for its more potent and menacing successor, yet even for its few flaws and inconsistencies, and the opinion that it slightly paled next to a share of other 1985 records, I've got little but fond memories of this full-length debut.

Where the East Coast was largely recognized for its prominent hardcore scene, from which many of the emergent thrash acts took a shovelful of influence, Overkill seemed to mirror early Anthrax in that they drew more heavily on a slew of NWOBHM influences like Judas Priest, Iron Maiden, and Motörhead. I'm sure they rubbed elbows with a lot of punk and NYHC groups at gigs and by the virtue of their native geography. Clearly they enjoyed the stuff, since several of them came from underground punk groups and their stage names were often tributes to that field. They also included a cover of the Dead Boys' "Sonic Reducer" as a finale, but rarely on this album do I feel like the influence leaves too much of an imprint. Most of the chord progressions, triplets, and leads seem to be hail directly from across the pond, and while there's a bit of a hardcore surge behind a tune like "There's No Tomorrow", they don't integrate such aesthetics as consistently as, say, Nuclear Assault. Then again, the band's violent and inspirational lyrics and relative street savvy ensured that they could be taken seriously by either the longhairs or the skins, because they simply oozed the sort of urban unrest city dwellers could relate to.

Strangely enough, it wouldn't even matter all that much to me what most inspired the guitars, because despite the fact that Bobby Gustafson had some killer riffs and fun leads across the first four records, it is the vocals and bass that have always stood out to me as the most prevalent elements in Overkill's sound. Bobby 'Blitz' chews this terrain up like a hellfire-powered garden tiller, evincing more personality out of his performance than you'd hear out of a half dozen other singers. I suppose a baseline comparison might be drawn to Bruce Dickinson, in terms of the operatic angst in his mid register, but where the Iron Maiden front man always favored solid, climactic melodies, Ellsworth zips and zags like some passive/aggressive lunatic let off the leash at your local madhouse. He screams, he laughs, he mock the listener like some capricious, petulent imp that even the devil wanted nothing to do with, booting the critter on up to mortal purgatory. In any other situation besides an energetic explosion of thrash, you might wanna strangle Blitz, but in the context of Overkill it makes for genuine, enthusiastic entertainment.

In particular, I'd point out the scream near the end of "Raise the Dead" or the barks of "There's No Tomorrow", as examples of such unrestrained, feral inflection, but he's also pretty good at retching out these more melodic, unnerving lines as with "Kill at Command", and Overkill are no stranger to using backups, gang shouts and chants like a horde of thugs about to go at you with switchblades, broken bottles and spiked chains. Perhaps his most common technique is to instantly shift pitch within a line, like an agitated housewife having a meltdown on her significant other when he gets home from work. Add to this the volatile and unapologetic mesh of horror, street wisdom and domestic violence in the lyrics and you've got a beating you will not soon forget. The line in "Feel the Fire" where he shouts 'there's nothing I despite more...than a bitch!' gets me every time...chilling and hilarious in equal measure.

D. D. Verni also makes his mark on this thing with a clearly Steve Harris-inspired bevy of blunted bass lines which pop and bounce along at about the same level of power as the rhythm guitar. Similar to Dan Lilker, he ensured that his generally underestimated instrument would retain a voice in this niche, and it really adds a course and clamoring power to the proceedings (like the buzzing fills in "Feel the Fire" itself), even though this is not the best produced of their records. The guitar tone, admittedly, could have used some more meat on its bones, an issue I also have with the s/t EP, but when multiple tracks or leads are implemented it does seem to improve. In general, though, even where Gustafson mixes it up between surgical chugging patterns, chords and tempos, the riffs here are not one of the album's strongest points. They rule in a classic like "Rotten to the Core", "Second Son" and "Hammerhead", but elsewhere they feel like mere reconfigurations of the writing off earlier British records. That said, the processed distortion of the guitar, which reminds me also of early Savatage, at least feels fresh and punchy.

I could go either way on Rat Skates' drums here, which are solid, snappy and belligerent but occasionally a bit of a mess (like the intro fill before "Raise the Dead" kicks in, it just never sat well with me). Once the band gets rocking, he sounds fine, but I think they might have been mixed a little loudly throughout and the tom fills often detract from the guitars. In all, the production to this record doesn't evoke the same level of nostalgia in me that other dirtier speed/thrash records of this period did, like the Canadian trifecta of Razor (Executioner's Song), Exciter (Long Live the Loud) or Piledriver (Metal Inquisition) that also came out in 1985, but Feel the Fire is still pretty authentic and dark. I also like the touches of atmosphere the band incorporated to create a cheesy 80s horror miasma, like the percussion and heart beat leading off "Raise the Dead" or the 'creepy' riffing and wind that heralds the first chapter in their eponymous saga "Overkill".

All told, pretty great fucking record. I don't enjoy all the songs or individual riffs equally, but anchored by the storming and maniacal presence of Bobby 'Blitz', this is an album that spent several years in rotation in the tapedecks of myself and numerous friends. Personally, I prefer Taking Over for the more face ripping and explosive chorus sequences, not to mention the more muscular production and construction of the guitars, but I'd certainly take this over anything the band has released beyond the 80s. My attention was drawn more towards Hell Awaits, Bonded By Blood, and those Canadian speed metal records I mentioned above, not to mention Fates Warning's The Specter Within, quite possibly the greatest East Coast metal record of that decade, but Feel the Fire was wholly reliable to stir the blood and help induce puberty.