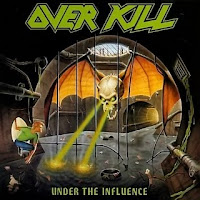 Barring the arguable importance of any of their stylistic 'comebacks' later in history, Under the Influence was perhaps the most important album in Overkill's career, the 'make or break' moment where they had ridden in on two fairly spectacular recordings, already had a deal with one of the larger US majors, and needed to start churning out the hits that might place them in league with any of the 'big four' thrash bands who were selling hotcakes (though many would say the East Coasters deserve a quarter of that accolade themselves) and inspiring generations of heshers. So it's sad to say that, while strong, this was somewhat of a disappointment for me. After Taking Over, I expected only the world, but what I got was the sewer. A charming sewer, granted, and one that would introduce us formally to the group's long-term horned, batwinged skull mascot, but like Chaly, who we all wanted very badly to incinerate that douchebag on the cover, it comes up slightly short of its mark.

I don't know if it's the result of the band rushing this out the door, or the transition to the new drummer Sid Falck, but something about the production here just never sat quite right with me. It's not 'bad', mind you, but I felt like the bass was often a little too pluggy and the vocals didn't seem quite so forceful or confident as they had on the first two albums, occasionally too distant from the other instruments the mix. The band was once again working with Alex Perialas, who helmed Taking Over and also did some of the engineering on the debut, but this album doesn't seem as balanced and level as its predecessor. That aside, the guitars, drums and vocals are all clear and distinct enough for you to enjoy them individually, and the riffs are meaty and hammering enough to stir up a mosh pit and get the band their first major video airplay with "Hello to the Gutter", which feels like melodic Van Halen hard rock riffing diffused into punk restlessness and grating but unforgettable vocals. The drums feel like standard muscular rocking, which suits this tune in particular, but the salient chorus provides the song's salvation, and it's no wonder this became a fixture for gigs and another fan anthem in line with "Wrecking Crew".

There's not quite so much depth here as there was with Taking Over, but apart from "Hello..." you're treated to a handful of staples like the petulent "Shred", which opens the record with some of the band's fastest and most aggressive riffing to its day, only to transition into a bouncy fist-baller redolent of the material Anthrax or M.O.D. were writing at this same time. Or "Mad God World", with its treacherous grooves and lunatic chorus, and "Brainfade", with some sticky and interesting guitar progressions. It's the latter half of Under the Influence that fires off a few blanks. There is plenty of variation to be had, between some of the clean and tinny guitar intros, surgical riffs, and chunky mid-paced crowd pleasing, but songs like "End of the Line" seemed inconsistent, each measuring off some solid mosh rhythms with zipping leads and vocal patterns that never completely hooked me on the line. It's still an album I can listen to in completion, thanks to the pacing, charismatic lyrics and nostalgic appeal, but my enjoyment is not distributed evenly throughout.

Of course, sized up against a lot of the average American thrash choking up the record shelves of the late 80s, Under the Influence was still good enough to keep the band hovering in the average metalian's radar. I remember coming away from this with a similar impression that I got from State of Euphoria or ...And Justice For All: that the album felt mildly overproduced, and that it's modern compunctions lent too much of a sterile, plastic wrapping to what otherwise might have proven poignant songwriting. Compared with the more ripping, raw force of records like Razor's Violent Restitution or Tankard's The Morning After, or the dry, disturbing emanations off Slayer's South of Heaven, Under the Influence seemed somewhat 'assembly line', a series of mosh anthems akin to late 80s Anthrax or Zetro era Exodus which were hammy and fun rather than soul searing, belligerent excess. Not necessarily a negative in this case, since a number of the songs are strong and memorable enough to have earned a stable spot in the band's set lists; but while Under the Influence is still worth owning for any Overkill fan, and admittedly superior to anything the band has produced since, I could sense even in my teens that some thrashing summit had been reached, and this was the band coming down the far side of the hill, back to the city and their day jobs.