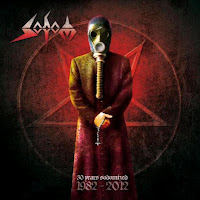 Sodom's latest collection is a doozy, a box set clocking in at three full discs and 2 LPs, with all manner of omake-style extras like posters, stickers and such to sate the diehards with more than just a mere musical retrospective. It's also somewhat affordable for all it includes, and the sheer scope of the material places it well past the Ten Black Years - Best of Sodom compilation released in 1996, which was ultimately pretty worthless outside of a few rarities, despite it's comprehensive glimpse through the group's chronology. I should point out that the glaring fact this band has gone 30+ years already without throwing in the reins makes me feel incredibly old, even though most of the members have got over a decade on me.

The biggest draw here is the 'official bootleg' The Witchhunter Decade, which is included in both CD and colored double-vinyl formats (how thoughtful), and provides a slew of live and pre-production/demo material spanning from about 1984-1992. Performances from Holland, Belgium, Germany, Switzerland all sound appreciable noisy and raw, pretty representative of the band's first decade (if you've experienced their original Mortal Way of Live you can confirm this), but this was almost without exception my favorite period in the band's history. As one would expect, the performances are not exactly flawless, with some feedback or slightly imbalanced levels in the instruments, but they suffice. The performance of "Body Parts" from Japan is probably the best sounding, with raucous sewer bass tone and vicarious thrashing force. Otherwise, there is a truly grisly rehearsal for "Sepulchral Voice", unpolished versions of "Shellfire Defense" and "The Saw is the Law", and a demo for "Sons of Hell" with an explosive black/punk style dowsed in Tom's rasp.

The 'Thirty Years War' is the pure retrospective part of the collection, 2 discs and 30 tracks hand picked and delivered in chronological sequence, with an average of about two per studio full-length. Surprisingly, the band didn't just go for the 'obvious' picks each time. We'd have expected, "Burst Command 'Til War", for example, but "Agent Orange" and "Nuclear Winter" are nowhere to be found. On the one hand, this shows a conscious effort not just to rehash the songs they've already rehashed for prior comps (though there is some overlap), but on the other, if you were trying to pawn this off to someone new to their sound, I feel it goes without saying you want your best material, and many of their best songs have been omitted. Either way, though, this is likely to prove the least valuable element in 30 Years Sodomized, because most of the folks willing to slap the money down on this beast might not appreciate the redundancy...

So, ultimately this is not so much a serviceable introductory 'greatest hits' package, more of a love letter for the fans who have clung to the band's legacy and collected all their studio and live records. Even the bootleg material is not heavily impressive so much as it's a net for completist mosquitoes. Having the vinyl is great, but I suspect that many who pick this up will be more interested in setting on a shelf for display and staring at it more than poring through it, but then you've got a nice poster of the band, a history booklet, and if you've ever wanted to send your auntie a Sodom postcard...here is your chance. Can't say I truly would recommend this unless you've got the disposable income after feeding your family, and it could have been MUCH better in terms of audio content, but if Angelripper and his revolving door of war-thrash co-conspirators have earned your trust and coin through the years, and you think they deserve even more of it, you're not exactly getting ripped off here.