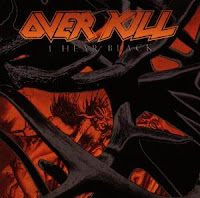 There seems to be a fairly overt consensus among thrashers on I Hear Black as the official shark jumping of New Yorkers Overkill, but I have to admit I had a slightly differing perspective, already feeling diminishing returns from their music since about 1988. True, there were a few tracks here or there that kept my blood boiled in anticipation for whatever they'd issue next, but Horrorscope ground me to a dead stop, and naturally, with so much of my beloved sub-genre disintegrating through the 90s, I had little expectations for Overkill's future. I Hear Black, the sixth full-length, was one I acquired as part of one of those mail order music club deals, a dozen CDs for a penny or something like that, so I hardly felt burned by its lack of much redeeming, but this is one case where I must defer to the majority: Overkill really dropped the ball this time, and even if I found its next eldest sibling a disappointment, this was worse by several orders of magnitude.

The production is partly to blame. Though they were reuniting with Alex Perialas, who handled some of the band's best albums, I Hear Black comes off dry, dull and lifeless, similar to some of Flotsam & Jetsam's output in the 90s; as if there were some earnest attempt to deliver the band in some sort of stable cubicle/studio sterility to ramp up their chances with the masses that had already fled thrash metal to grunge, alternative and gangsta rap. The guitars, while clean and surgical in their execution, have little staying power, and while Verni's bass flutters along with its ritual, ear rupturing celerity, it seems to follow along with the guitar lines too closely. The band's next drummer, Tim Mallare had joined the fold here, and while he does a respectable job with some decent crashing and thumping, he does not have all that much to work with as far as the songwriting. As for the vocals, Blitz is still quite himself, though they experiment more with multi-tracking, panning effects and other techniques to layer complexity into the music (as in "Just Like You" or "Dreaming in Columbian"), where they should have been working more on making the riffs and choruses stick.

This catches a lot of flak for its 'groove' elements, but let's be clear: there is nothing wrong with a band going down this route if the music is well-written. A lot of great metal albums of any decade include 'grooves' to them, so the fact that this trait has in retrospect become such a pariah of the scene is perplexing to me. In I Hear Black, most of these aspects take on the form of post-Hendrix/Zeppelin rock and roll redolent of what you'd heard from Pantera, Corrosion of Conformity or Black Label Society in this decade. With songs like "Undying", this sort of pacing provides a skeletal structure to which they attempt to add atmosphere by screaming the chorus, and it just doesn't work because the riffing sequences are banal and uninspired. Where a band like Sabbath or Trouble crushed you with its colossal curvature, Overkill has always come across as wimpy when exploring this territory, from the dull earlier "Skullkrusher" to the misfires here like "Spiritual Void" or "Ignorance and Innocence". This album needed speed and excitement, but what manifests is sluggish or mid-paced disinterest...

There are a few points where they attempt to concoct a more clinical, creative and progressive brand of thrash as in "World of Hurt" or "Dreaming in Columbian", but even these are infested with weak arsed riffs that one must struggle to retain in the brain 5-10 minutes after one experiences them. "Shades of Grey" is a trivial power ballad which mutates from cleaner guitars to vapid grooves, and no amount of layered vocal harmonizing is going to save it. The flanged, bass-driven instrumental "Ghost Dance" with its sparse chords and backing drum thump is completely ineffective, and ultimately there is not a single song on the whole of the record that can stand toe to toe with anything on the band's list of staple/classics. I don't think Verni and Blitz were completely compromising the band here, since it was a pretty direct line from its predecessors, but any notion of the album's 'expansiveness' is fully counteracted by its flaws, and while this is not so colossal a misstep as something like Diabolus in Musica or Load, both of which came later, I have no problem identifying I Hear Black as the nadir in Overkill's career. The 'orange and black' attack just wasn't working out for anyone.