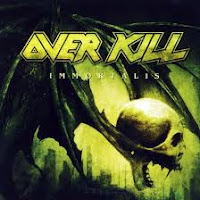 Immortalis is yet another bromidic kick in the balls from the once and future greats Overkill, another costly studio exercise which fails to expand or elevate the brand in any meaningful way beyond fattening up their discography. Once again, Chaly is represented on the cover in a fairly uninspired pose, like he's locking onto some off-screen prey, but I like to think of it as the winged skull barking out his discontent at the band for producing yet another of those albums which abandons the listener's memory almost as soon or he/she has first experienced it. But hey, at least we're doing with the proper color palette this time out, and even if Immortalis seems like it's just doing the rounds in some hamster wheel of midlife thrasher crisis, it at least feels more enthusiastic than its direct predecessor ReliXIV.

Which is not saying a hell of a lot, because once again we've got an album of relatively average thrash with interesting riffs in a severely limited quantity, infected with groove metal and rock & roll influences that were never this band's forte and will never play to their strength. I've said it a thousand times before, that I've got no real problem with the 'concept' of groove metal, or even its execution. I enjoy Chaos A.D. much to the chagrin of any underground consensus, and I like how bands like Gojira or Meshuggah implement the simpler, meatier riffing structures into something you can quake your limbs to. The 'breakdown' was a wonderful technique used through the 80s in both hardcore and early speed/thrash metal, and there are still hundreds of bands in the 21st century which use it well. But when I hear some cheap, dense Pantera Far Beyond Driven style passage as in "Skull and Bones", with the lame interchange of post-Anselmo pundit Randy Blythe (Lamb of God) and Bobby Blitz sounding his street-est, I begin to laugh out of control. No sir, I do not like that singer or his band and the Overkill capable of writing "Deny the Cross" and "Rotten to the Core" does not fucking need this in any form or fashion!

Granted, this isn't that Overkill, but it's still difficult to conceive of Immortalis as anything but a 'last gasp' of the less inspired and inspiring beast they devolved into through the 90s, especially taking into account the two albums they have since released. New drummer Ron Lipnicki arrives in full force, with some strong double bass skills and chops that seem a suitable replacement for long-term thunderer Tim Mallare, and like any album the band released in the past 10-15 years, the production here is meaty and more potent than the actual music written. There are a few classier riffs here than the previous album, like the trad metal bits in "Hellish Pride" or the surgical, unexpected thrashing that breaks out in "Overkill V" (which gives us a nice foreshadowing of Ironbound), but the overwhelming majority of songs written for this seem to lack that certain 'something' which made the band so special in the Gustafson era. It's pretty much stock biker thrash, a spiritual vessel for the core Overkill aesthetics that settles safely into its mooring without ever taking a glimpse beyond the docks.

That doesn't make it poorly implemented, because it's clear the guitars have a decent grasp on their bluesy, wailing leads, and there's a little more of a furnace lit under its ass than ReliXIV. Only a few tunes like "Skull and Bones" and "Head On" suck outright, where others like "Shadow of a Doubt" seem like a hint of what's to come when the band return to their senses. D.D. Verni is not much of a presence here in comparison to the old days where you almost felt you needed to turn him down, but I'm not sure these songs deserve much effort on his behalf. Blitz turns in a slightly more venomous and taunting performance here than the last album, but he's still not screeching out those amazing, sticky choruses he once manifest in "Elimination", "I Hate" or "Electro-Violence". I hardly had high expectations for this, since Killbox 13 was, for me, the only album they'd written since the 80s that balanced on the precipice of success, but it still creates the cloying consistency of sack breath despite never fully choking off its own genitalia. The law of averages once again upheld.