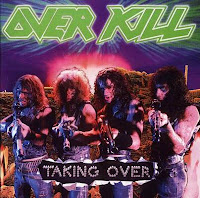 The second and last of Overkill's studio full-lengths to feature the band posing on the cover, a duty that would be handed off to someone, or 'something' for the followup Under the Influence, Taking Over leers at you with the promise of your own bullet ridden carcass. Let's be honest, these guys weren't just showing off their great looks. A few of them might have been sporting some spiffy perms, but they weren't exactly pretty boys. Feel the Fire revealed their silhouettes against the burning backdrop, and with Taking Over they're about to catch you in a four barrel crossfire. The threat was real, and these guys looked dirty and driven enough to enforce their sonic obliteration. Coincidentally, that is EXACTLY what transpires upon this sophomore, which to me remains the best individual album in their decades-spanning canon, and the iconic Overkill experience which has yet to be rivaled or reproduced by anything that would follow it.

Taking Over doesn't just revisit the manic personality of its predecessor, it pours a bucket of concrete over it with a more forceful, muscular guitar tone that gives Bobby's vocals a run for their money. The riffs on this thing are ungodly excellent, an aural matrix of brutal thrash redolent of what bands like Metallica were doing on their seminal Ride the Lightning or Master of Puppets, only dowsed in East Coast gasoline and Ellsworth's impetuous screeching and pavement-preaching. In fact, Gustafson sounds so much stronger on this record that it feels like Blitz had to rely more on his higher pitched, howling delivery just to remain at the helm of this vessel. You've also got a tighter, intense performance from drummer Rat Skates, and while the increased tenacity of the six strings might serve to shove Verni's bass lines to the peripheral, he's still in there hammering away like a human piledriver. Like Master of Puppets, I've often found that the production of the album receives a few quips and complaints, but I'd have it no other way, because it truly helps capture that moment when the thrash niche was becoming more clinical, complex and hostile.

If I had to draft a 'top 10' list of Overkill tunes throughout the years, then I think it says a lot that at least six or seven of them would be lifted from Taking Over. It's really THAT good, and in fact I would have no qualms about naming it the top East Coast USA thrash record of all time, edging out other beloved beatings like Survive, Among the Living and Persistence of Time. It opens with a melodic escalation you simply don't expect in "Deny the Cross", accompanied by thudding war drums and masterful, minimal chugging that transition beautifully into the monolithic machine gun rhythm guitars while Blitz ruins your world with every murderous line of lyrics! The breakdown riff is fully gladiatorial with its thin, melodic underpinning and massive chords, the leads strange but superb, and the chorus (featuring a good gang shout) is among the most sticky of the 80s in this genre.

Other top flight tracks include the catchy punk-buster "Wrecking Crew", which would become the moniker for the band's fan club; "Fatal if Swallowed", which was drafted forward from the original Overkill EP with far superior production and atmosphere; "In Union We Stand", a mid-paced anthem with excellent pacing and roiling chugs through the verses; "Use Your Head", which like so many other pieces on this album, is an instant catalyst for reckless, moshing release; and "Powersurge", motherfucking ditto. But my favorite here is most likely "Electro-Violence", incendiary and intense (courting a lot of "Ride the Lightning" influence) with a chorus breakdown riff that should have replaced the S.O.D. theme on Headbanger's Ball. I'm talking to YOU, Kevin Seal, Adam Curry and Riki Rachtman. I know you're reading this! Simply put, this tune is one of those defining, unforgettable East Coast staples like a "Brainwashed" or "I Am the Law". If you don't like it, marker up those patches, dump your denim and hi-tops in the nearest trash can and go stuff yourself in a cubicle and listen to Katy Perry. License to be cool revoked!

The only song here I don't love, which frankly holds Taking Over back from the precipice of perfection, is the closer "Overkill 2 (The Nightmare)". I appreciate they were trying to follow up the eponymous horror themed track from the debut; to build their own 'franchise' like Friday the 13th or Nightmare on Elm Street (both of which turned out pretty goddamn awful themselves), but it's all too to rare that I feel it's spooky siren call. There are some nice techniques here, like the creepy bass of the intro and the little three-note melody sprung off the guitar line in the verse (to mimic the incidental horror scores of the period), but as a whole it's just not as lethal and efficient as all the (shorter) tunes leading up to it. That said, for the ninth man on your bench of nine, it's dependable enough to dunk a few severed heads into baskets.

'Taking Over'. No, they were not kidding, and through the years this album has transformed into one of my favorites of 1987, alongside other mighty thrashers like Killing Technology, Terrible Certainty, The Ultra- Violence, and the comparably vicious Finished With the Dogs. An irascible, unshakable paragon of punishing personality that the band just haven't been able to match in the ensuing decades. Gods know they've tried, but while Under the Influence and The Years of Decay had a few aces in the deck, and the more recent records like Ironbound have seen a streak of youthful energy permeate their weary ligaments, there is just no comparison on a song for song basis. Own it. Love it. Fear it. Own it again, for your little sister and brother. Buy your dog a copy. You have the technology. You just need soldiers. Remove your antenna, and then play it in the car when you've trapped your friends, until they too submit to the green and black, neck straining attack.