Ectovoid - Fractured in the Timeless Abyss (2012) 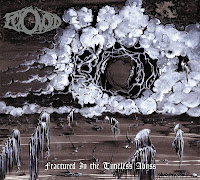 Pretty much a textbook case for death metal nostalgia, Alabaman brutes Ectovoid will no doubt draw a lot of comparisons to the US pioneers Incantation, Immolation and Cianide in their use of stripped, authentic battering rhythm guitars and broad, ominous guttural vocals which create morbid, sepulchral atmospheres in contrast to the more harried riffing and eerie, breakout lead sequences. But where a lot of bands seek to drown this same set of influences in ridiculous levels of reverb to create an infinite, cavernous scope to the production, this trio deserves credit for allowing the sheer instrumentation to deliver that same, haunting effect, with loads of drums and constantly winding tremolo riffs that feel as if they were written in that critically important 1988-1993 period when the niche was just taking flight as the bastard child of thrash metal.

There's still a vaulted echo to the Pillard-esque vocals which places the band in the same sphere as many of their young contemporaries, but what I found interesting is that Ectovoid do not write like a bunch of slugs. This isn't death/doom like you'd expect out of, say, Father Befouled. They play fast as a rule, alternating between blasted passages and fibrous grooves which settle somewhere between the realms of Onward to Golgotha, Demilich's Nespithe and late 80s Bolt Thrower. I've read that the band invokes influence also from archaic doom and black metal sources, and I can certainly sense such an imprint, but more as an after-effect than in the actual architecture of the guitars, which are delivered with this oppressive, muddy tone that somehow doesn't manage to hijack the clarity of the notes. There is a quite natural air about the production, as if they made a conscious effort to avoid excess polish and deliver as honest and 'live' a sound as possible, with only the vocals sounding separate, and that's due to their sweltering, unearthly volume and inflection.

Riff-wise, I wouldn't call these the most novel of constructions, but advocates for returning to the analog roots of the style will be happy that they don't sound entirely derivative of other source material. Perhaps not all are patterned as evilly and memorable as one might desire, but Ectovoid floods the listener with such a constant, frothing miasma of churned change-ups and guttural atrocities that one never needs fear excess repetition (if it appears at all, it's only due to the stylistic similarity of so many of the selections). Choppier, slower paced riffs are used to break up the momentum in tracks like "Dark Clouds of Consciousness", walls of open, thundering chords vary up the tremolo picked passages, and the leads are quite well rendered to provide that added dimension of frightful melody that might be lacking in the deeper din of the rhythm section. I always felt like the music was effective, if individual tracks didn't prove all that distinctive from the whole.

Ultimately, Fractured in the Timeless Abyss is like suffocating in crude oil, a consistent and tremulous journey into the opacity of trans-dimensional horror that summons up all manner of Lovecraftian imagery. A cool record for those into other, recent abominations like Binah or Blaspherian.