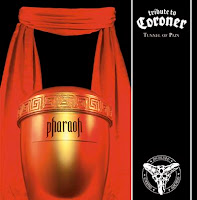 The prospect of covering a Coroner track, especially from their creative zenith in 1988-1989 has to be a daunting one, if only for the sheer level of raw musicianship required to pull it off. Over 20 years later, most bands are STILL not playing at the level of the Swiss trio. Naturally, metal has become more extreme in the ensuing decades, and from a standpoint of sheer technical ability, bands are playing pretty damn fast and difficult compositions, but I've not heard a guitarist or bassist in as long who could match Ron Royce and Tommy T. Baron with their baroque infused, classical saturated complexity. Or at least none in that very specific, unique niche that has been abandoned since the band folded after the disappointing and dumbed down sound of Grin.

Granted, if you're going to try, US acts Pharaoh and Canvas Solaris are as good as any to throw to the wolves, but as this split proves, doing so and adding any embellishments to the originals is next to impossible. Each of these two groups plays their elected rendition fairly close to the Coroner cut, only with a modern, cleaned up production that I feel takes away from the oblique and overwhelming atmosphere of the original. Granted, in Pharaoh's case, "Tunnel of Pain" was pretty polished on No More Color, but the other feature, that of "Arc-Lite", sticking with Solaris' instrumental modus operandi, it seems to lack something. It seems that both outfits focus on playing the lead lines and melodies so straight that they never real make the songs 'their own', which is absolutely what I want out of a cover: an interpretation, where this is more of a fan love letter. Understandable, I suppose, since it's fucking Coroner, who were one of the best bands ever at their prime, but not prompting anyone to go out of their way to pick this up unless they wanna throw money at the constituent acts.

The one exception here is to experience Tim Aymar performing Ron's vocal lines with his airy screams, quite different than what I'm used to with the tune (though he barks a few of the lines at a lower, familiar pitch). It almost comes across like this had been a Realm song from around the same period, and as a result i favored this to the Canvas Solaris cover. Musically though, the interpretation plays it pretty safe, despite the quality of the guitarists involved they don't really rock the boat. I wouldn't say the production of either tune is up to snuff with the respective band's studio original works, but hell...if you're dropping a 7" tribute, there are worse libations one could choose from the backlog of 80s brilliance. And, to my knowledge, there is not exactly a surplus of Coroner worship laid to tape. I remember Sceptic from Poland doing a decent version of "Paralized, Mesmerized", but that was from Grin and therefore much simpler to pull off. Ultimately, this didn't impress me, but then it also doesn't dishonor the object of its affections.