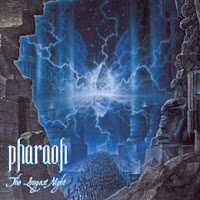 Though it's not quite so pristine and re-listenable as its own successor Be Gone, The Longest Night makes a number of improvements over the Pharaoh debut, and inches towards the band's current sound with class. Once again, we've got a group not willing to merely settle for the part and parcel of power metal tropes, but attempting to make strides in the field that help refresh and revitalize the form, keeping it relevant and half way intelligent while celebrating its roots. Not that a number of the band's forebears haven't done the same, but while Omen, Manowar and Virgin Steele might have provided some of the base ingredients for the Pharaoh recipe, alongside overseas legends like Iron Maiden and Judas Priest, this album at no point seems needlessly backwards or nostalgic. It sounds like it looks, blue lightning lashing out at the masses marching forward in sublimation.

Matt Johnsen dials up the melody here even further, with a lot of his dual lines trumping After the Fire in terms of their sheer infectiousness, and the rhythm guitars through a lot of the record seem like a better backdrop, splayed more into open, ringing chords that better carry the man's natural electricity. The backing riffs are not all that distinct themselves, yet superior to what he was writing a few years prior, and better conductors for the almost unbearable lightness of the leads' being. Not to mention that the general mix of the album helps enforce this glittering glaze of harmony. The drums and guitars are better balanced, and though Aymar slices straight through with the bold grit of his inflection, it all feels somewhat more progressive and potent simultaneously, even on a piece like "In the Violet Fire" where the band is alternating between its passages of cleaner guitars and more emotional vocals with the rushes of melodic speed metal that feel like later 80s Fates Warning infused with Iron Maiden at their prime, only more surgical and technical in how the melodies flood the listeners' brains.

I enjoy more or less every song on this album, whether it's the straight power of "Fighting" which almost sounds like something Hammerfall might write, the frenetic "I Am the Hammer" which at times reminded me of Germans Rage, or "The Longest Night" itself which provides a glorious evolutionary stopgap between Number of the Beast and Awaken the Guardian. Probably the only exceptions for me would be the two lengthier pieces, opener "Sunrise" and "By the Night Sky". Both have plenty of choice riffs and moments, and dynamically they don't indulge in tiring repetition, but I feel like they could have been snipped off at 4-5 minutes and better kept my interest; not to mention that I question the logic of putting "Sunrise" up front when there were far better choices strewn throughout the album that would hook the audience without any chance of growing dull in their depths. Otherwise, it's pretty goddamn consistent, even the instrumental finale "Never Run" succeeds in the video game/chase scene melodies coursing through its peppier riffs; and the guest leads via Chris Poland (ex-Megadeth) and Jim Dofka are tasteful and flush with their surroundings.

Tim Aymar was already a strong component on the first album, but with The Longest Night he too surpasses himself, with a wider range of emotional heights and pitch. Much easier to pick out individual, memorable lines than After the Fire, even in the mere verses of the songs, though they're not so bright, meticulous and haunting as those throughout Be Gone. He's especially potent when he's tracking off against himself, swapping lines in songs like "I Am the Hammer" where the airy reverb and effects built a strong contrast to the pounding of the rhythm guitar, but he's husky and dark enough that he even manages to stand out against the group's central, driving characteristic: Johnsen's melodic tsunami. All in all, a killer effort with nearly every component polished and spit-shined to a simmering perfection, and songwriting of depth and courage which, even at its most derivative feels like far more than a retrospect tribute. To think that they would get even better...