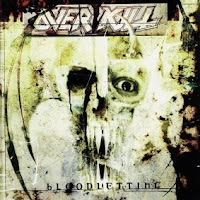 Leading up to this coverage of the Overkill discography, I might have told you that Bloodletting blurred into Necroshine for me, that I've always found the albums inseparable in terms of songwriting and their aesthetic choices of hybridized groove and thrash metal, but in truth Bloodletting feels better put together than its studio predecessor, and is able to hold the listener's attention span for a larger chunk of its playtime. At the turn of the new millennium, so many fresh sounds were pouring out of extreme metal's constituent genres that an album like this was hard for me to pay much attention to. I bought it because I buy most of their records out of some strange sense of loyalty I maintain with most of the long-time veterans in the thrash genre, but I'll admit I have not gotten much value out of it...and in returning once more to see what I might have been missing...well, I'm not.

Part of the reason I do rank this above the mediocre Necroshine is that I simply seem to appreciate how Dave Linsk puts his guitars together, even through the weakest, banal grooves that infest the largely he's got a particular structure to his performance that just locks better with my rhythmic imagination. There are some admittedly lame riff patterns through the album, with songs like "Let It Burn", "I, Hurricane" or "Thunderhead" where the guitars feel incredible predictable and almost effortless to anyone who chug along and mix up a few bottom frets into chords, but in general I found that this was a more thrashing effort in total, where we were starting to see the 'Kill emerge from its sodden 90s slumber. A good example of this is "What I'm Missing", a faster speed/thrash tune with hints of 80s Megadeth threaded beneath Blitz' raucous delivery, and "Left Hand Man" which opens with these clean guitars and melodies and opens out into machine gun fire hooks that are positively saturated with energy, even despite the breakdowns. There are additional passages of cleaner guitars throughout which feel appreciably atmospheric and haunting.

Bloodletting also manifests as a more vicious and appealing experience where I almost constantly feel that same level of threat from Taking Over or Under the Influence, it just doesn't stick as much when it comes to the choruses or the quality of individual vocal lines and note progressions. The rhythm section sounds great on this one, with Verni losing a bit of his dextrous sore thumb presence and blending in a little better into the arching and crashing of the rhythm guitars, and Tim Mallare delivering a balanced attack through the slower and faster pieces. The leads here in tunes like "What I'm Missin'" are pretty good, Linsk doesn't bite off more than he can chew, carving out your ear canals with just enough finesse and unhinged spontaneity that you'll begin to remember them even when the surrounding riffs are lackluster. Blitz also manages quite a heavy load of aggression in his inflection here, nearly growling as he batters through the verse of "Death Comes Out to Play" into his street harpy heights and back again.

I would almost dub this a good album, save for that half of the songs dwell on borderline retarded grooves that seem like the band just can't shake the specters of failed stylistic growth that they had been flirting with for years. The lyrics are a crap shoot, and generic riffing and breakdowns abound, but I got the impression that at least for a few seconds in each tune there was a genuine, volatile surge of what I loved about the band so much in the mid-80s. In a way, I almost felt as if this were an early 'comeback', though the band had gone nowhere. It's not as strong as Ironbound or their most recent album The Electric Age, but despite a few stumbles it was better than anything else they'd released since Horrorscope.