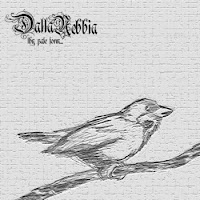 Considering that they've only been around for about two years, I must say that South Carolina's Dalla Nebbia ('From the Fog') has one of the most refined senses of melody in their songwriting that I've ever experienced from black metal in the US. The band's tremolo streams glisten like the tears of clip-winged angels forever severed from their heavenly host, and they usher in enough dynamic range in the three songs of this EP that they can easily comport themselves through 8-9 minute track lengths without dragging the listener under the usual haze of thoughtless repetition and pretentious bloat. Thy Pale Form... is made even more impressive by the fact that it's the work of only two musicians, vocalist Zduhać and multi-instrumentalist Yixja.

The three tracks presented here do well to showcase the band's emotional poles, from the charging and near gladiatorial onslaught of lower pitched chords that inaugurate "The Apex of Human Sorrow" to the lush clean guitars and keys that simulate sorrow through closer "Shade of Memory". All of them, however, possess the duo's aesthetically consistent, exotic rivers of harmony that instantly sweeten the ear like sugar on a tongue, in particular the opener "Thanatopsis" which is through and through the catchiest of the three, from its eerily hypnotic blasted sequences, to the mellow breakdown with cleaner narrative vocals (quoted from an early 19th century poem), to the eruption of blazing, melodic doom in its depths. It would be hard to pin down the sound precisely: certainly there are roots in Swedish black and death metal like Dissection and Katatonia, conjured up through the longing subtext of the guitar melodies; the first Fall of the Leafe album came to mind, perhaps even a touch of the earliest Opeth (Orchid) in the sheer breadth of the songs and their contrast of floods and calms, but these are mere building blocks in the group's DNA, they do not emulate anyone directly.

The rasp throughout Thy Pale Form... is brazen, roaring and creates a carnal counterpoint to the thinner, higher pitch guitar tone it's often set against. On the whole, I felt like the mix of the EP was a bit skewed towards the higher end, so it has this ability to pierce straight into your skull, which works well enough for the melodies but perhaps not so well when the band strikes a more brooding pose. Also, the drums here have been programmed, which is nothing novel for a black metal project like this, but while they're synced up well with the varied riffing patterns, I do feel that an actual live drummer would benefit this music if only for the natural inflection of the bass, snare and cymbals, not to mention the fills. My only other complaint would also be cosmetic: the cover art is probably just something thrown together to create a rustic mood, and the music and introspective, solemn lyrics certainly conjure such a space, but Thy Pale Form... deserves better.

Otherwise, Dalla Nebbia is quite a surprise, from an area one doesn't normally associate with the style, and the pieces are in place here for a promising career, balancing beauty and harrowing aggression. The guitar architecture feels fresh and imperative, not jaded in the least, and fans of other newer US acts in this field like Autolatry, Sylvan Realm and Obsequiae should not hesitate to check this out.