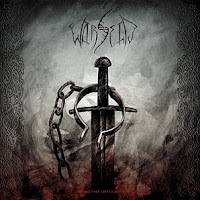 Wisconsin's Warseid writes and performs with an evocative blend of progressive and symphonic extreme metal elements that seems somewhat out of place and character for the Midwest, a region I tend to associate largely with brutal death and gore (and thrash before that, in the 80s). That's not to say they don't do it well, because if there's one incessant plus on this Where Fate Lies Unbound EP, it's that the group is constantly engaging the listener through shifting dynamics, layers of melody and musicianship that never rest on tired repetitions, and they deal with genre identity in rather broad strokes, never throwing out an idea if it will fit into the song's sense of adventure.

The clean guitars on this release are superb, anchored with rhythmic percussion and exotic mystique, particularly at the onsets of "Shackles Through Sand" and "Frost Upon the Embers", but the majority of the material consists of winding, progressive black/death passages that reminded me of a union between the Vintersorg solo works and latter-day Death. Much of this is joined by synthesized orchestration, though they keys often erupt into more prog-laden atmospheres like the bridge to "The Vengeance Pact". The vocals are a pretty average, a functional smattering of slick rasps and slightly bloodier growls, delivered in syncopated step with the music, but not by themselves all that tormented or interesting. There's also a somber, folk element at play, not so much until the 11 minute finale "Farewell", with cleaner vocal harmonies that air gracefully alongside the lush and seasoned acoustics; but I'd say the center of that track felt a little too 'tavern metal' for me, if you can make that connection. The lyrics are a little less complex than the musical ambitions, tales of battle and adversity rooted in Nordic myth, but not badly written.

Wasn't hugely into the rhythm guitar tone, which felt a bit too polished for my liking and didn't seem capable of delivering the riffs with enough power to really drive them home. Granted, they are crystal clear, and allow the listener the aural registry of every crisp, delicate note progression. The guitars are constantly chucking out new riff sequences to keep the listener curious for what will happen next. In fact, the proficiency level of all the musicians is quite high, from the beats to the note selections, you get the feeling Warseid has a lot of experience listening to numerous sub-genres of metal, and no shortage of ideas. I never thought the electric guitars were as memorable as the cleaner sequences, and the keys and axes felt a bit flimsy and incoherent in places to the point that the songs rarely came together for me in their entirety, but Where Fate Lies Unbound is certainly a showcase of talents, and the mix of styles is not obtuse. Even if these particular tunes didn't always satisfy my attentions, I don't perceive any limit to what Warseid might accomplish with further writing and refinement.