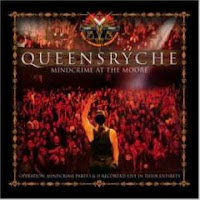 I wanted to review Mindcrime at the Moore simultaneously with its spiritual predecessor, Operation: Livecrime, since they essentially provide the same service to the Queensrÿche fan, a complete live performance of the group's popular Operation: Mindcrime album in full, separated by the span of about 16 years. The caveat is that this release also features the album's sequel, Operation: Mindcrime II in all its own...err...glory on stage. My original reaction to these albums was like night and day. Loved the original, but almost completely hated its successor, so needless to say I was not much interested in hearing it in the live setting, more curious as to how the older songs would hold up after nearly two decades.

Like Livecrime, this has been released in both audio and video formats, the former a 2 disc spread with each 'chapter' occupying its own, and the latter shows the group prancing around the Moore theater in the band's home territory of Seattle, Washington. If you've watched Livecrime, you'll note that this has a more 'street' feeling to its presentation rather than the arena rock atmosphere there, with purplish bricks in the background and a lot of purple/blue lighting in general. The stage seems a little more tight here, but in both cases the band had plenty of space to move around, so I'd say that their 'presence' was adequate. With the exception of guitarist Mike Stone, this is also the original Queensrÿche lineup, with Pamela Moore once again guesting as Sister Mary, and Ronny James Dio showing up to perform his part as Dr. X on the song "The Chase" from Mindcrime II (which I'm guessing is impetus enough for a lot of folks to check out the record, even those who could care less about the primary band responsible).

I admit, I was expecting this record to suck pretty hard, but the performances of the original Mindcrime material do hold up rather well. The guitarists mete out pretty clean renditions of the rhythms with an added bite to them that differentiates them from the earlier live album, but they still sound rather accurate. Tate is not quite himself from the 80s, and he does seem to shrivel a little when he's attempting his higher pitch, but let's be fair: he's a lot older here, and he still does a pretty bang up job. Moore is still herself, adding a little sass and self-groping to the sausage fest on the stage. However, when Tate lurches into the more narrative bits like the end of "Spreading the Disease", it comes off a little goofier than on the original album, largely due to the gulf in years and relevance. Jackson and Rockenfield sound themselves, which is to say they implement their roles incredibly well, and overall the balance of all rhythm instruments is a little closer than Livecrime, where the leads could lash out rather loudly like the vocals. Ultimately, though, I think I really preferred the production of the original, it just felt larger than life and well suited to its times, where this environment (aural and video) seems more constrained.

Also, since I didn't care about the material much on the sequel album, the second disc did very little to change that fact. It's great to hear Dio and Tate, two of the premiere metal sirens, dueling out their roles in "The Chase", but the music is still pretty bland and the lines not as catchy as I would have hoped. I did like that they included an encore of "Walk In the Shadows" and "Jet City Woman", both superior to any of the Mindcrime II tunes. I have to wonder though...Tate seems pretty enthusiastic through the performance, to the point that I have to question the modern opinion that he's sick of playing all the old material. His pipes might have rusted up a fraction, but he's clearly having a good time with it, and this rubs off on the product as a whole: it seems more like a genuine tribute to the audience more than a shallow attempt at profiteering on nostalgia. Combine this with the substantial amount of material involved, and that Queensrÿche do not fuck up too noticeably in nearly 2 and a half hours of performance, and you've got a solid product. Not as good as Livecrime, but better than anything else the band has put out since the early 90s. I wouldn't advise paying for the audio CDs alone, go for the DVD release, which isn't a shabby addition to your collection.