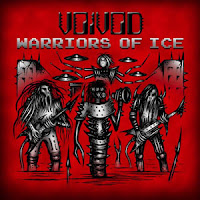 As disheartening as it was to lose one of my all time guitar gods in Denis D'Amour, and to then discover the band would be continuing on without him (a feat I couldn't at that time feel possible), I've since put personal feelings aside. It's their band, Piggy undoubtedly wanted them to press forward and honor his memory, and they at least made the best choice available in selecting Cryptopsy, Martyr and Gorguts alumni Daniel Mongrain as his replacement, because frankly he's one of the only Canadian axeslingers with the style and imagination to really pull it off. And if Warriors of Ice, the second official Voivod live album, is any indicator, he's not only fitting the bill, but stamping all over it as he waits to sign the next.

This is the Voivod live record we should have gotten a lot earlier, when Piggy was still alive. Recorded in 2009, close to home at Montreal's Club Soda, this is 70+ minutes of excellence which does more than merely 'live up' to expectations, but damn near exceeds them. Not only does Mongrain kill this, but the fact that you've got Blacky back on the bass, and Snake handling his vocals (and not Forrest) ensure that this is an exponentially superior experience to Voivod Lives. The vast majority of the material here is culled from the band's classic period, up to and including Angel Rat, and hearing all of these diverse mechanics from albums as varied as Nothingface, War and Pain and Killing Technology is a treat. In fact, apart from two tracks ("Treasure Chase" and "Global Warning") off Piggy's last studio effort, Infini, everything here is taken from the band's Golden Age of invention, and songs from "Voivod" to their cover of Floyd's "Astronomy Domine" are delivered with passion and precision. Hell, even the subtleties in the original guitars are mostly present, proof that Mongrain stayed up many a night doing his homework to deliver the article as genuine as possible.

It wouldn't mean much if the album didn't also sound awesome, but it does. Rough around the edges, but it only adds character to the performances. Snake sounds as pissed here as ever in the studio, and he does seem to drown out the guitar a smidgeon, but the drums and the bombastic, distorted bass are amazingly clear, and Blacky in particular deserves enormous praise. It's like he had never left. Had never been replaced by Forrest, or Jason Newsted. Most importantly, though, the mix of the record conveys that same ominous, otherworldly level of alien threat that distinguished all of the group's earliest albums. A bleak future, prophetically presented to the audience in the progressive thrashing fits of the now! I can't speak much for the 'crowd interaction' moments, like the goofiness used to initiate "Tribal Convictions", but otherwise Warriors of Ice is a straight shot of paradise for the long term devotee, a balance of primacy and brilliance which could be wrought only by a band that cares a WHOLE lot about getting it right.