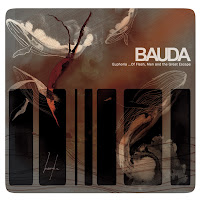 Euphoria...of Flesh, Men and the Great Escape is my first exposure to the band Bauda, but hopefully not my last, because this thing is frankly so eclectic and exotic that nearly anyone could wrest some enjoyment from its eaves, like plucking a fruit from a rare tree with many varieties. I've seen the band defined as 'folk metal', but I feel that might be a slight misrepresentation of their sound. Sure, they use a lot of clean and scintillating guitars, and interesting rhythmic dynamics, but there's not much of an 'ethnic' or geographical constraint to what they write. For example, the band is Chilean, but you don't get much of an impression here that their sound is South American, rather quite universal in scope.

It's also not much of a 'metal' record, with the exception of some drudging, atmospheric, distorted guitars that might partake of prog or doom influences; but I'm willing to bet they've evolved out of some more aggressive roots (I know it used to be a one-man project with folksier instrumentation). Instead you've got a smattering of indie, space or post-rock influences, with grooving bass, beautiful if occasionally atonal vocal harmonies, whispers, occasional dissonance and loads of drumming. The second song, "Humanimals", one of the album's heaviest, is for me the perfect exemplar of the band's style. It's over 10 minutes in length but never once becomes boring or disjointed, and rarely shows any penchant for repetition; it's almost like Voivod meets Mew. Not all the tracks require such a staggering length to impress: "The Great Escape" itself is gorgeous acoustic rock affixed with creepy, alien synthesizers and vocals polished enough for radio; "Crepuscular" is a lazy and lovely acoustic guitar instrumental with a bit of classical influence to the picking, and once again the superb ambient backdrop.

The production is insanely clear, worthy of a far bigger budget rock band (like Dredg or Death Cab for Cutie), but the real star of this show, beyond the vocals, is the rhythm section. The bass is constantly curving, swaying and inventing subtext for any of the busier tracks, and the percussion is intense whether it's going tribal, standard rock fills, or lightly crashing along to one of the album's more soothing moments. Where the album picks up in aggression ("Humanimals or the doom-influenced "Oceania"), the guitars crash and course with abandon, often heavily affected to create a swerving level of psychedelia and fuzz. Yet somehow, despite the album's very disparate array of sounds and feelings, it all seems like a cohesive, conceptual experience. It's not always memorable, but it's ALWAYS interesting, and fans of post-metal outfits like Katatonia and Virus, or Tiamat's brilliant album A Deeper Kind of Slumber might well wish to explore this. Or, really, any person in the mood for something different.