Shadows in the Crypt - Cryptic Communications (2012) 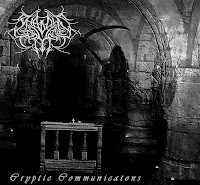 Contrary to a lot of the US black metal of the last decade, known to heavily experiment with outside influences and mutate the genre's roots into atmospheric, often ambivalent new forms, there is a countersurge of recent groups who trace their inspiration more directly to the incendiary Scandinavian roots of the early 90s. Pennsylvania's Shadows in the Crypt fits readily into this category, with the clear motifs of death obsession and cult incineration implied through both the cover artwork and the primal, poseur shredding intensity of the music they compose. This is ugly, fierce and unforgiving music, equal parts De Mysteriis Dom Sathanas and In the Nightside Eclipse (sans the symphonics), with a healthy trace of older Marduk and even some late 80s Morbid Angel what with the explosive nature of the leads and shift on a dime dynamic riffing collisions.

They're also not entirely devoid of atmosphere, as they set up the record with the eerie and apocryphal acoustics of "Beneath Threatening Skies" or the intro to the later title track, both of which reminded me of how the thrash band Testament used to build momentum, only Shadows in the Crypt instead erupts into this face melting, blast-beat driven form of black metal which hearkens back about 15 years to when bands were challenging one another with what they could accomplish at such velocities. Higher pitched tremolo picked chord textures dash out into the infernal nightscape, often enforced with these crazy breakdowns where double bass rolls off against a searing solo melody as in "The Vengeful Gathering", and I like that some obvious effort was placed in the note progressions to evoke an exotic, at times Eastern sense of dire melody that brings a ritual appeal to the violence. The leads are unanimously sporadic, wicked and exciting, a reflection on the band's early extreme metal influences (black and death). Vocally, the central rasp emissions are hardly unique in this field, but they're enforced with some rugged growls and ominous, distant choirs and chants, or deeper, baleful clean vocals that blend in well against the abrasive, neck-snapping rhythm section.

Ultimately, where Cryptic Communications might lack a truly distinct flavor, it compensates with this rare authenticity that stirs up the nostalgia for the formative years of the genre. You feel that same sense of black clouds smothering the landscape, fallen angels beginning to rain down from the heavens to the pits of ash and purgatory beneath, that you once felt when the legends were releasing records overseas. There are occasions on the album in which the blasting and riffing can seem too cyclic or repetitive, but in general they do well to keep the tempos and patterns shifting, and they never bloat their tracks to incomprehensibly dull lengths (rarely above six minutes), so there is no need for ceaseless and mundane repetition. The production is far from elegant: it's vicious, remorseless and at times mildly uneven, but the drums snap along under the dense and maniacal strain of the vocals and guitars, and you definitely feel threatened throughout, which is precisely the reaction I desire from such a work. Not the most impeccable, amazing or flawless record you're likely to hear in this category, but a strong, exciting sophomore nonetheless. Clearly they've got a handle on what they're bringing to the feast, and they serve up the souls of their audience with a necromantic flair.