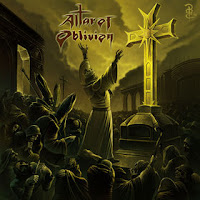 Psychedelic tendencies and occult fixations have been trending so highly these last few years, through the metal subculture's obsessions with nostalgia and imagery (in many cases, to a time before one even existed in this world), that it tends to rub off in the music itself with more fashion than substance. Few places is this more evident than in the doom metal niche, where bands are so often competing with one another to sound the most like a Hammer horror film score, Master of Reality or Sabotage, like they were born in the 60s or 70s. Is it too much to ask for just a solid frickin' doom record once in awhile? Denmark's Altar of Oblivion have heard this question, and once again, answered it, with a firm and effusive sophomore of suffering and scoured melody.

This is not your usual bong-worshiping, hippie plaid parade here, but a band that adheres to the traditions of huge Euro doom that were wrought by the mighty Candlemass and Memento Mori, with a few infusions of American acts like Solitude Aeternus and St. Vitus. The guitars are fully metal, leaden chugging with a lot of Gothic gravity as they stride through sad melodies and mid-paced heavy/doom sequences that support the wavering, near operatic vocals of the front man. I was originally not the hugest proponent of Meister der Töne's inflection on their first record, Sinews of Anguish, but I grew accustomed to it to the extent that it has no ill effect on me here. He hasn't got the sheer power of a Messiah Marcolin, or the hazy range of Ozzy Osbourne, but he seems to have molded himself quite well into the funeral procession, and pulls off some fine atmospheric choruses in tracks like "Where Darkness is Light" and "Sentenced in Absentia" where he adds to the haunting sadness. In fact, I almost wish he'd play around in this range more often, since it seems a lot tighter than his lower notes, and really sails off against the thunder of the guitar and the synthesizer (though his deeper range works well in the solemn bridge of "Sentenced...").

Speaking of the keys, they're used unobtrusively and tastefully alongside the core instruments, acting more like a third guitar than getting straight in the listener's face. If I've got a simple complaint with the album, it's simply that the riffs are often too tried and true in execution, and the overall production might benefit from a more primal, potent atmosphere. Let the guitars breathe more of that raw cemetery air; here they feel too compact and dry. Add more sludge to the bass, let the drums shatter across the gloom infested backdrop. Grand Gesture of Defiance seems a bit too controlled. That aside, Altar of Oblivion has written another functional, consistent record here which gladly eschews the prevalent trends in the name of sincerity. I'd give it a slight edge beyond the debut, though they've got a ways to get yet before really crushing my emotions. Fans of early Solitude Aeternus, Lord Vicar, modern Candlemass (with Rob Lowe) and the like should certainly give this a spin.