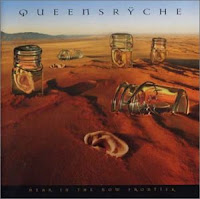 Have you ever found yourself in a situation in which you were exposed to a group of musicians suffering from a massive disconnect with their audience? Think back on the days of junior high or high school, where you might have been granted a 'concert recess period' in which some band of middle-aged cover rockers showed up play Beatles and Cream for an audience more concerned with Justin Bieber's latest tweets. Or perhaps you were at some holiday festival, where instead of hiring the younger hotness genre bands of your county, they wrangled up some wedding band who wanted to show their 'edge' and play Nirvana for the crowd? Hear in the Now Frontier is much like this, only if you were to magnify the sentiment tenfold and apply it to a well established act who had enjoyed immense popularity over the previous decade.

Much has been made of Queensrÿche's sixth studio full-length as their 'grunge' inflected work, or their 'coping with the 90s' sound in which they were attempting to stay competitive with the enormously popular indie to radio rock 'alternative' market (which itself had already begun to peak by the later half of the decade) reared on Lollapalooza. This is certainly true to an extent. Tracks like "Anytime, Anywhere" or "Miles Away" shoot for vapid, uninspired heavy rock riff patterns redolent of the Stone Temple Pilots or any of the other hangers on of the whole Seattle vibe. But I think, viewing the album as a whole, it's far more of a hearkening back to the band members' own roots in classic rock. I can hear a lot of Beatles, for instance, in the vocal arrangements and general pop attitude of the music. Perhaps some Cream, or non-metallic Black Sabbath in the bluesier elements that permeate the guitars. Certainly Pink Floyd finds its way onto a track like "Some People Fly" or "All I Want", the latter of which boasts a surprise vocal spot from none other than Chris DeGarmo, which is competent if nowhere near so powerful as Tate. But you really get a sense Hear that Queensrÿche was continuing to distance itself from the metal foundation that built its audience and industry support net, even further than Empire or Promised Land...

To put it bluntly: I was not on board for this flight, and neither were many other Queensrÿche fans. Sure, with the incendiary commercial success of Empire, and its higher quality successor, this album was bound to push units on its name brand alone, but I was stunningly disappointed with what manifest here, from the limpid Jars of Ears generic progressive rock cover art (Rush pass on this one?) to the music itself, which at best is inferior, throwaway radio rock uninspired that I felt myself longing for even a return to the glories of the harder songs on the previous album like "I Am I". Usually, a band evolves through its career but retains trace elements of its formative, rugged youth, but I'd honestly find it impossible to connect this with something like The Warning or Operation: Mindcrime if it weren't for Tate's smooth, melodic vocals. In all fairness, he still seems to put some effort into his arrangements, and the range is still there, but he so rarely flexes his pipes since they'd seem at odds with the boring rock being performed by the band. The lyrics run through the usual gauntlet of social relations, introspection, aging, and they're not entirely shabby: the real problem is that the album lacks even a single, distinct and staggering chorus sequence...

A few of the harder, grooving guitar rhythms, used at their best in "Hit the Black" or "Get the Life" seem like they might have been mildly engaging for a group like STP or Alice in Chains. Wilton and DeGarmo use a huge tone with a lot of low-end to amplify the grooves, but the actual patterns of notes become tired even after a half dozen repetitions, and add to this the fact that the drums usually move at two speeds: slow and simple tribal thunder to mid-paced rock. Even where Rockenfield is hitting as hard as possible, the very banal nature of the music just doesn't lend itself to much percussive excitement, and once again Eddie Jackson is just sort of plumbing along below the guitars without much personality to his own choice in lines. The production is comparable to some of the sounds Rush was using on its 90s output, fluid and crystal clear, a cushioned seat for just about anything the band are willing to mete out, but it's just one of those albums which had me scratching my head as to who its intended to impress (only a few seconds in "You" with the higher pitched, counter rhythm guitars remind me of the 80s 'Ryche I so adore.)

This also turned out to be the first in a long series of quickly stagnating sounds and poor choices the band would pursue over the course of 15 years, before the recent split in 2012 (Tate going solo, the rest of the roster replacing him to return to their metal roots). There is not one album post-Promised Land that I can honestly say I enjoyed, so Hear in the Now Frontier serves like a flagship or herald of diminishing relevance and misery. It's a weak album in just about ever department outside of its studio sound. Sterile songwriting that should have been relegated to a side project or 'solo album' for one of the members. Gone are the epic overtures and ambitions of the 80s, replaced with snugly vapor-rock for sad, aging men. To even think back on this disc fills me with emptiness and bafflement at who thought it was a good idea.