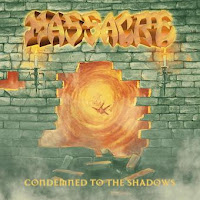 Many have probably followed the bickering between Kam Lee and his former band mates who remain in Massacre; I haven't exactly read up on the drama, but for whatever reason, the opposing forces haven't reconciled their differences, and the 'comeback' release features instead one Edwin Webb in the vocal position, as well as a new drummer in Mike Mazzonetto. With Condemned to the Shadows, a two track EP, the band are more or less attempting to reconcile themselves with a fan base starved for the old school, and thankfully entirely ignoring their 1996 abortion Promise (hands down one of the worst metal albums I've ever heard), so we can all rest a little easier.

The sound here is pretty much a straight continuity with the From Beyond album which dropped over two decades past, and the Inhuman Condition EP which followed it. I was never a huge proponent for the band, greatly favoring their contemporaries Death and Obituary, whose albums Scream Bloody Gore, Leprosy and Slowly We Rot best defined that old Florida sound alongside Morbid Angel in the late 80s. Though were active pretty early on, Massacre still felt to me like something of an also-ran, and the riffs and song structures were never quite so creepy or memorable. Truth be told, I had a similar reaction to the tracks presented here. While the execution is competent, and they fully embrace the atmosphere of the 80s decade recordings, eschewing polish, progression and technicality, the writing doesn't seem to accomplish much more than that.

Let's give this quartet some credit, though, because for what it's worth, they flex all the chops one would expect of a Florida band during the dawn of death. Rozz's riffing is muscular, between sepulchral chugged patterns and an occasional lurch into morbid death/doom, and he glazes the gloom with a number of screaming miniature leads and effects that truly contribute to its atmosphere. The rhythm section is 'beyond' fantastic, in fact I'm not sure the drums and bass in this band ever sounded so good: Butler keeps his lines dextrous and interesting beneath the rhythm guitar, and Mazzonetto is quite the find with a lot of solid fills and a very live aesthetic to the production of his kit that feels genuine and energetic. As for Webb, he doesn't attempt to rock the boat too much here, there's a fair share of Schuldiner and Lee in his inflection and he can efficiently alternate between yawning chasm growls and a few salacious rasps.

If I were to judge this music on its production alone, I'd have to say I was fairly impressed, because they sound as rejuvenated as a freshly risen corpses out to do their zombie master's bidding. The music is dark and crushing, the intent is pure. As far as career necromancy, this is a feat on par with the newer Autopsy releases, and I probably enjoyed this just as much if not more than anything the band has previously manifest. It's a complete 180 from the bullshit in the mid 90s, and fans who really love their old records should find it much to their inclination. That said, the songs here didn't push all the right buttons in terms of their actual note progressions, the riffs seemed like mere retreads and not so interesting. Assuming the band's recording a new full-length in the near future, they'll have more breadth and variation to work with, but these 8 minutes were not wholly satisfactory. Not bad, though, not at all. They've got the acting down, they simply need a better script.