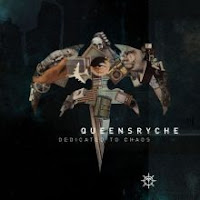 While Dedicated to Chaos reminds me eerily of Queensrÿche 1997 disappointment Hear in the Now Frontier, I have to give some credit for its unintentional undercurrent of comedy. One might conjecture that, after the sinking success of the band internationally through diminishing sales and fan outrage at titles like Operation: Mindcrime II or American Soldier, the Washingtonians would come to their senses, reevaluated the lousy decision making process that flushed them through the shitter, and turn this rig around. But rational thought and earnest self preservation are not qualities we could associate with this band until more recently: they were clearly mismanaged, artistically bankrupt, and still thriving off the trickle-down success of their name recognition. There was still a dwindling fraction of the fan base that held out some hope for the greatness of their Golden era. If Metallica, Judas Priest and Iron Maiden could (arguably) turn their sounds around to matter once more, then why not the one mighty Queensrÿche?

I do appreciate this album more than the two before it, but really, that's like saying I enjoy being kicked in the balls more than having those same 'nads crushed via mallet. It still sucks, I just found myself cringing that much less in the process of revulsion that defined my relationship to the band's discography post-1994. As I stated, it has quite a lot in common with their sixth album, but there seems to be a darker atmosphere here that weaves its way into the selection of chords and glaring melodies that dominate tracks like "Hot Spot Junkie" and "At the Edge". A few pieces, like "Higher" would not have seemed all that out of place on their overrated 1990 smash Empire. Tracks "At the Edge" and "I Take You" practice a lot of the dark, almost tribal rock grooves omnipresent on Tribe. The choruses seem to nudge themselves slightly beyond those of American Soldier, not sticky to the brain but not entirely unpleasant when you're thrust into their presence. The band also experiments a little more with more electronic sounds, though these are usually delegated to intros ("Drive") or brief sequences in songs, rather than overwhelming experimentation, a tactic that, frankly, would have made for a stronger record in the long run, even if it alienated them further from their roots.

Rhythmically, this is Hear in the Now Frontier with slightly more meat to the guitars on the front end of the record, Michael Wilton reliving and reconfiguring the mediocrity of the prior 14 years. The drums are decent, with a nice pop to the snare and a more muscled execution in the mix than recent records. Where Tate uses his voice atmospherically, as in "At the Edge", to spark off the ambient bridge sequence, Dedicated to Chaos, there are hints of something far more interesting, which he then proceeds to shit on in the ensuing seconds as Jackson's bass builds back into the track. In addition, the lyrics are so thoroughly embarrassing through this record that I found myself laughing out loud in at least half a dozen places. They range from the plebeian and uninspired ("Get Started") to sheer, misdirected comedy, like "Hot Spot Junkie" and its musings on the internet: "get some wave time, air wave time, this Wifi frenzy world". This isn't Queensrÿche's first cautionary flirtation with the repercussions of technology induced into civilization: Rage for Order was littered with them; but where that sounded genuinely concerned, this is just fucking silly, especially in how Tate's vocal patterns attempt to make this all seem 'sexy' in delivery.

Queue the 'Caberet' tour, and try very hard not to choke on your own vomit. Yes, read the lyrics to "Got it Bad" and then picture in your imagination Geoff Tate trying to create sexual tension on stage with a bunch of strip...I'm sorry, 'dancers'. Seriously, go watch a video of this, and then gouge out your own eyes. It's worse than that time Dani Filth was dancing around with the painted gargoyle gals on tour. In attempting to tap into the social or antisocial 'current' of the internet and its devices, a society saturated with instant access, limitless pornography, Facebook/Twitter bullying, and scandal, Queensrÿche ends up seeming treacherously dated and lame; coupled with the mundane and often inane level of musical composition, you've got yet another in a long line of stinkers from this once proud and infinitely promising group, seemingly incapable of figuring out what they themselves, or their audience could possibly want from their music. I've got a hint for you, Q-boys: it begins with an 'm', and ends with an 'l'. Good to see you finally work that out on your own. I'm sorry the realization did not dawn on you any sooner.