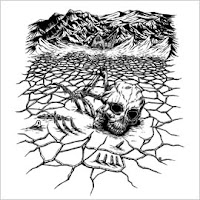 If you've any interest in the revivification of primal Finnish death metal motifs, then you've really got no other choice than to check out Stench of Decay, one of the finer and more dynamic acts to emerge from that scene in the past decade. I can't promise that they cling exclusively to the concepts introduced by their forefathers like Demilich, Abhorrence, Demigod and Convulsed, but they amplify them with threads of Dutch brutality and a massive, pseudo-Swedish guitar tone that buries the listener in an avalanche of festered filth and body parts. Think Asphyx + Dismember + early Demigod. Yes, have your credit cards standing by, because thanks to their latest label Ekto Records, you can now collect their two demos and 2011 Visions Beyond Death EP in one place.

The material is presented chronologically, beginning with their eponymous 2005 demo, but fear not, because in terms of quality and consistency, there isn't much difference outside of slight tweaks in production. First and foremost, Stench of Decay are riff-writers. They know how to concoct Cyclopean grooves into these crashing patterns that make it impossible to sit still. Repugnant, abrasive and brutal, the drums jam under these things as if the man behind the kit had literally sat himself on a porcupine. The leads and melodies, as sparsely as they are presented, soar off atmospherically through the subterranean slugfest of the rhythm guitars, and they also storm into all manner of crunchy, surgical bits redolent of old Pestilence that later explode into primordial, grinding guitars that shake the teeth out of mouth. Perhaps best of all, Jussi Rajala's vocals draw upon early Dutch and Scandinavian death metal influences and apply a nice, haunting echo as they soar across the crushing, cavernous claustrophobia created by the oblique overdrive of the guitars.

If I had to choose between the three recordings that comprise this collection, I'd have to say that the oldest songs are the best, followed by the Where Death and Decay Reign demo (2009), which includes a suitable cover of Abhorrence's "Vulgar Necrolatry". The most recent two tunes from the EP are perhaps the most atmospheric and murky sounding, but while they're still a blast, the individual riffs in there weren't quite so standout as their elder siblings. That said, this is a fantastic bargain, and though it's not a proper full-length (we're still waiting on one after about eight years of the band's existence), it's summarily superior to most of the old school/retro-death recordings I've heard over the past few years. Don't expect top notch production values or anything intensely original: Stench of Decay just know how to pen a song that will get the dead scratching the ceilings of their grave to commit acts of murder and reverse necrophilia on the unwary living. Through variation, punishment and primacy, they more than deserve your attention.