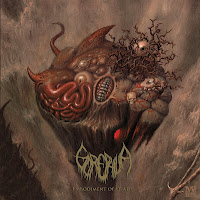 Finns Gorephilia are one of a small handful of bands that have emerged from the European retro-death wave in recent years to not simply ape their myriad forebears in tone and aesthetic, but to take their inspirations, mix them into a vat of cement, and then build up a style around this very foundation. Thus, Embodiment of Death will seem occasionally familiar through a number of the individual riffs in its architecture, but it's no mere mock-up of a particular Entombed or Dismember record; more a pastiche of early Pestilence, Autopsy, Morbid Angel, Incantation, Convulse, Demigod, Vader, and many other bands from the Swedish, Finnish, Dutch, Polish and US scenes in the 90s, cast into a blender and then poured into a tall and wide, murky glass of kick-you-in-the-ass.

This album expands upon the precepts of their Ascend to Chaos EP last year, and it takes all of about 30 seconds to drive the listener straight into the grave. Floods of muscular, tremolo picked guitar patterns are strewn over a matrix of ultra-violent dense blasting, while the vocals' even more ghastly take on the old Martin van Drunen meets Craig Pillard guttural do not fail to satisfy as they thrust out into the subterranean ceiling of the album's production. Gorephilia excels primarily in its accelerated state, with thundering tunes like "Gods Stand Aghast" or "7 Gates, 7 Spheres", but rather than monotonously speed through the entire track list, they also can slow to a mid-paced groove well enough, often layering in melancholic, haunted guitar melodies that reek of a death/doom inclination. Perhaps the real star of this record it its production, so sepulchral and thick that it would batter your skull in regardless of what notes the band was issuing; it's dark, punchy and overwhelming without needing to rely solely on the old Swedish cliches used by about 1,000 of Gorephilia's peers in recent times, and thus its as frightening in sound as it is in appearance...a gluttonous, infernal column thrust up from nothing.

If there's one deterrent to my appreciation of this album, it's simply that the sorts of riffs the Finns are writing here are quite commonplace, and not generally too catchy when examined individually. Embodiment of Death is well suited to blowing out your ears and intestines for its near-40 minute run-time, and it presents another bruising variation amidst the primal thrust. All instruments are well performed, including the growl, and they do well to structure and layer their tracks with a number of dynamics and levels that prevent tedium from setting forth. Yet, this is not an album which I feel myself being summoned back in an infinite loop of fascination. I'd love to hear the band gouge themselves on some more frivolous, spurious leads that attend to the chaotic surge of speed and aggression, rather than the higher pitched tremolo rills. There is a sense of atmosphere to the music, but it could be further enhanced. Otherwise, Embodiment of Death is sure to sate anyone who longs for the brute sincerity of 90s death metal. It's hostile and accomplished without fattening itself with excess levels of polish or technicality, and it will twist your head off and torpedo-punt it at least 50 meters through its corpse-infested mire.