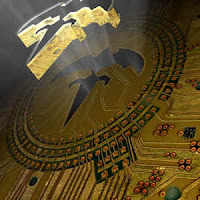 Q2K beckoned forth the 21st century of Queensrÿche with a slightly more modern rock fixation than its two predecessors. One can still hear a bit of that 90s radio-alternative and grunge influence through what seems like a misplaced batch of B-sides for Hear in the Now Frontier or Promised Land. I shouldn't have been surprised, really, since this was the first full-length without Chris DeGarmo (his replacement was Kelly Gray), and he'd already contributed to the group's decline with the previous outing. I'll ignore the goofy title and the lame circuit board and icon cover, these guys had long been obsessed with the ramifications of technology in their lyrics: the music here needs no help in sinking to the bottom of the barrel, and Q2K is without any doubt one of the worst albums the band ever shoveled upon its audience.

Of course, the very notion of Queensrÿche as a proper 'metal' band was already a decade old. Bands like Tool were outpacing them in terms of base aggression and lyrical gravitas, but then they were never exactly comfortable on the heavier side of things, so perhaps its a moot argument. Rush's Counterparts is about as far as this record goes. At its limit, it's endowed with Pearl Jam style grooves ("Sacred Ground"), and deeper, thickened grunge paste riffing ("One Life") that attempts to contrast Tate's melodic business as usual. The problem is, none of the songs come anywhere near sticking to the listener's conscience. Even if I were to ignore the past and accept Queensrÿche as some sort of melodic rock band, they're still behaving like they belong deep on the bench. Second stringers at best. Just who is this for? Thirtysomething Goo Goo Doll and Soul Asylum fans pining for those college years in which they got laid to "Silent Lucidity"? As much as I might despise those other bands, they at least had the irritable characteristic of songwriting infectious enough to coerce millions of radio listeners...Q2K was nowhere to be found.

The best I can say for this is that Geoff Tate's voice still sounds reasonably well sharpened, though we were well past the point where he had anything new to offer. He syncs up well, loads of harmonies and piercing tones that would have sounded superb over an actual riff set worth a damn, but the band seems to think some reduced, rock & roll groove is squeak on by. Q2K practices a similar airy devotion to the rest of the band's 1994-2011 catalog, so you'll experience a lot of streaking melodies and tribal drum sets that would be better implemented on the followup (Tribe). To be fair, there are a few moments here, like the climax of "Burning Man" or the dreamy spaciousness of "Beside You" where the band does achieve the revelatory bliss you might recall from, say, Janes Addiction in the later 80s, but this comes through the arrangement alone, not from any particularly memorable vocal line or guitar progression, and thus the whole of the record is so painfully easy to forget. Production-wise, it's not a far cry from its nearest neighbors in the 'ryche catalog: clear, professional, pop-oriented, but just not as vibrant or effective as Promised Land.

While there weren't as many tracks here as its bloated predecessor, I have to wonder why, throughout 11 tunes (before re-issue bonus material), the band can't muster even ONE equivalent to something like "I Am I" or "Empire", at the very least. I'm not asking for or expecting Operation: Mindcrime level output, since that inspiration is clearly all washed up, but this is perhaps some of the most frustrating material they've released. The rockers rarely go anywhere, the softer tunes are meek, some of the lyrics are pretty awkward (I ain't no Romeo/I'm just the man for you, "Liquid Sky"), and you just get the sad impression that there is no more thunder down under, burning at this band's loins. After all, Hear in the Now Frontier might have just been a fluke, right? Any minute now, the band will return to form and shake this bullshit out of its system, right? Those were the questions this album posed, and we all know how they turned out. Were it not for the disgraceful disappointment of Operation: Mindcrime II, this would have nadir scrawled all over it in feces.