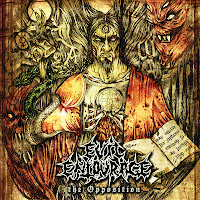 Though my exposure to Mexican metal is admittedly far from complete, I've always had a tenuous interest in the bands there, probably because I've been disengaged by a number of the thrash and black metal acts I've heard from the region over the past few decades, and probably also because I'm just an asshole. Death metal is one area, though, in which the nation has held together a more consistent output, not only through cult albums from Cenotaph or The Chasm, but a more recent surge of extremity through the likes of Hacavitz and Denial. Despite already having two full-length albums under their belts over the last five years, Tamaupalis' own Evil Entourage is not a band I've crossed paths with, but while they don't necessarily engage the listener with the same levels of atmosphere or innovation as those others I just listed, they are nonetheless proficient at kicking in the door and then kicking in your face.

This is chop-heavy, 90s-influenced brutal death that draws often on the lurching, chugging squalor of greats like Morbid Angel and Deicide, with a few hints also of Cannibal Corpse, Suffocation, and I also picked up a handful of older Sepultura vibes in a few of the grooves. But to take it a step further, Entourage have ingrained this truly rich, brash texture to their guitar tone so that the listener can suffer every single palm mute as if it were stepping on his spine. Where they pick up the pace with a blast beat (as in the opener "Insidious"), the material was redolent of modern Cannibal Corpse (Bloodthirst and beyond) or Severe Torture, where the grooves in other pieces smacked of Morbid Angel circa Blessed Are the Sick or Domination. Footwork and beats are all solid throughout, and I was satisfied that the drums held their own against the crush of that guitar mix. The bassist is quite good, swerving all over the place in Alex Webster fashion wherever he gets the chance to loosen up, and the vocals deliver a stolid, guttural bludgeon that has a bit of the expected Vincent, Tucker, Benton or Fischer inflection. Brief leads and tremolo breaks are spliced through the meat of the potent rhythm guitars, and though this is not a flashy or particularly technical band, they hit the spot more often than not (like the wild solo in "True Rejected").

Still, though the production is an adequate and laudable marriage of past and present, The Opposition really never takes itself beyond any of the myriad acts who have already explored this niche. I dug the synthesizer orchestration in "Oblitus Fidei" for its ominous, martial step, and cuts like "Insidious", "Swathe to Blind" and "True Rejected" are nothing to scoff at, but there were rarely any of those 'money shot' riffs that keep me continuously returning to songs in sweaty anticipation. Evil Entourage is balanced, and competent, and they mete out destruction with avid enthusiasm and fresh, repulsive tone, but there is no truly distinct characteristic that a listener couldn't find elsewhere. The writing is solid, varied enough for 20 minutes of testosterone and neck strain, but the songs just aren't so memorable. That said, if you're heavily into the group's influences and you are seeking more along the same lines, there's no reason to avoid checking this out.