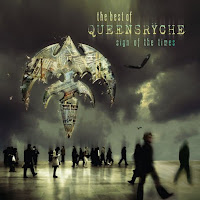 I'll preface this review by stating that Sign of the Times: The Best of Queensrÿche is the only Queensrÿche collection potentially worth spending real currency for, and even then that comes with the condition of finding it available at an extremely bargain price (I'd set $2 US as this price, $3 if you're feeling generous). If its predecessor, Greatest Hits was released during a dead zone in the band's popularity, a decade beyond its potential relevance, this was put out during an almost 'inverse' point in their career. Yes, the Washington group had been so mediocre for such a long spell that they were in arrears to the creative whole of humanity; and their disenfranchised fan base wanted desperately to collect on this qualitative songwriting bankruptcy.

The obvious solution to this conundrum: re-release a bunch of songs from when people actually gave a whit about your band. And for the first of two discs in this collection, that is precisely what Queensrÿche would do. Once more, the tunes are presented in a semi-sequential order to their release (meaning a few of them are scrambled, but it largely followed the flow of time). The problem is that almost all of these songs are the same that were selected for Greatest Hits, with the exception that a few have been omitted ("Empire", for one) and others added from releases more current to 2007, like "All the Promises" from the pathetic Operation: Mindcrime II. The one arguable obscurity among these choices is "Until There Was You", a song from the 2006 re-issue of Q2K, but this is one of the most bland and sorry excuses for a song in the group's career. Seriously: take any random song from Hootie & the Blowfish. Remove Darius Rucker's vocals, and add in Geoff Tate crooning like an ass who hasn't realized his radio share post-"Silent Lucidity" royalties had decreased significantly, and you've got a vapid and dry 'emotional' tune fit for your dogs bowl.

Luckily, these 80 minutes of primarily rehashed rehash are joined by a second CD that contains close to 70 minutes of odds and ends that span the group's career in the 80s and 90s. The raw, rugged demo renditions of early album tracks like "Take Hold of the Flame" and "Before the Storm" are charming and serve as a dreadful reminder of how promising the band once was, and what they might have continued to create if they hadn't stuffed their heads up their asses in a failed attempt to constantly recycle songs like "Silent Lucidity" in an endless procession of wimpy whining. There are some unplugged and acoustic performances of "Della Brown" and (obviously), "Silent Lucidity", though I was more surprised (and impressed) by the acoustic remix of "I Dream in Infrared", which keeps the drums and vocals but changes up the guitar tone, and still manages to function. I realize this, and a lot of the other b-sides here previously released on reissues; for instance, "Chasing Blue Sky" was even available on Greatest Hits, and "Last Time in Paris" on the Adventures of Ford Fairlane soundtrack (and elsewhere), but for someone who never spent the time obsessively tracking down the band's singles and only owns the original albums, then there is clearly some value to this half of the collection.

Still, I can't help but wonder that Queensrÿche must have dozens of reels of unreleased songs, and Sign of the Times could have been presented as a true love letter to its audience, with two full discs loaded with rarities and demos, and been infinitely more worthwhile. Hell, they could have attempted to release it with their Take Cover album (also put out in 2007) as the first disc, then offered maybe a digital version of the compilation for free with each purchase, and generated more interest and sales. And then, to top it off, written a metal album again instead of American Soldier, reaffirming their relationships as a band and to the fans that made them in the first place, and avoiding all of the recent drama. But, you see, that would have ACTUALLY MADE SENSE™, a taboo for bands and labels who want their poor audiences running forever in the same hamster wheels. As it stands, Sign of the Times is saved from utter shittiness by the second half of the collector's edition, but it could have been so much more...