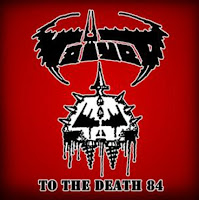 The necessity of To the Death 84 really depends on just how back your love for Voivod really goes. I've made acquaintances with folks who just don't have the same desire for the Canadians' primal punk/thrash roots as they do for their later, more involved, progressive works; and others that find the versions of several of these songs on War and Pain to be the definitive studio performances. I tend to side with the latter camp, but the caveat is that there are a number of cuts on this which simply aren't on the original tape or CD. If you've got the great War and Pain 2-disc re-issue, then most of this will prove redundant (even if the exact performances are not the same, those were also culled from demos in '84), but if you're still kicking around with an original copy of the debut, there might be something here for you.

This was basically the re-release of an extensive recording the band made in 1984 in their own rehearsal room, with 15 tracks and running at about 70 minutes, which was passed around to help the Canadians secure a deal for their debut. While undoubtedly primitive, and slightly less structured than War and Pain itself, I will admit that I've heard far worse jam tapes, and you're able to hear everything here from the wild, raw as fuck rhythm guitars, blistering and almost nonsensical leads, drums and bass, to Snakes' distinct, grimy and garbled vocals, and the charm in a track like "Hell Driver" or "Blower" is impossible to deny if you've any fondness for splatter-punk, thrash or aggressive speed metal. At the same time, you can actually hear slight hints of how the band would later develop through Rrröööaaarrr and Killing Technology to the entity most would find familiar. But, really, not much of the music here shows the same capacity for thought and variation that the band would later adopt. And it doesn't need to. They bull rush you with sinister, pent up energy in the vein of a Venom or Motörhead, and you can either band your head along, circle pit with your shit kickers and mohawk, or shut it off and listen to Angel Rat.

In terms of bonus material you won't find the original War and Pain, you've got about six options. They do a decent rendition of Mercyful Fate's "Evil", in which Snake's inflection is so over the top that it comes across like an old black metal rasp; and they also do a mean pair of Venom tunes in "Buried Alive" and "Bursting Out", to which Snake slathers even more wretchedly than Cronos. "Hell Driver" and "Slaughter in a Grave" would come out a few years later on the sophomore Rrröööaaarrr. But unless you've got a bootleg with them handy, this is probably the only place you're going to be able to experience, the monstrous, ballsy metalized blues of "Condemned to the Gallows" or the spoken "Incantation" interlude with its accompanying, spectral guitar ambiance. I can't tell if Snake is drunk or trying to really summon some infernal creature there, and it's not really a 'song' so much, but as far as I know, it's unique to this.

Ultimately, this is more worth it for the fans who don't own the 2CD War and Pain edition, and possibly worth it even to those who do. While I appreciate that purist, unpolished enthusiasm and spirit you'll only find in rehearsal and garage recordings, I couldn't think of a single place here where I thought the songs were more manic or effective than they appear on the studio full-lengths. One might find the vocals compelling, or just the loose nature of the thing, but it's honestly not all that unhinged. Voivod weren't fucking around here, they were attempting to make something out of themselves, and thank the constellations they did.