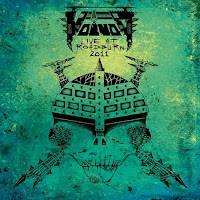 While it might seem a little 'too soon' for another live album so early after the magnificent Warriors of Ice was released, bear in mind that this was actually a very limited edition vinyl recording with a few hundred copies in circulation, and not meant to be a viable commercial product at large. That's quite a good thing, really, because while Live at Roadburn 2011 is still a decent experience and a collector's item in of itself, I don't think it holds a candle overall to its predecessor, thanks in part to the limited size of the set and a few audio imperfections that marred my enjoyment. In short, this is for whatever diehards can lay their hands on it, and desire the attractive tone of the cover art and another Voivod record for their shelves.

In terms of the Canadians' tightness and execution level, this is probably on par with Warriors of Ice. The Roadburn is a great, eclectic festival loaded with hard and stoner rock acts, a little hardcore, punk and other rock-related spectra like metal, so Voivod's progressive, sci-fi infused genre-spanning persona must have been right at home to anyone high as a kite. That said, I have nightmares of shaggy High on Fire hipsters throwing popcorn and tomatoes at one of my favorite bands. But if they can manage to get by on the Ozzfest bill without bodily harm, then I think they can handle the more intelligent and serious level of fans that Roadburn is likely to attract. They do it well, with a largely killer set of 10 tracks that are very often redundant to the Warriors of Ice set. The exception is that they've actually included "Forlorn" from Phobos, which stands out a little to its relative lack of memorable hooks next to the remainder of the selections. To compensate, though, we get "Experiment", so I'm more than willing to forgive that one, unenthusiastic lull in the procession.

Of course, the catch is that this is a more thuggish and bass-sounding stage capture than its predecessor, and I didn't feel Blacky was so effective with his tone so swollen. Mongrain's performance is adequate, and you can tell he's still concentrating on aping all the nuances of Piggy's style, but I felt that a few more flaws and inconsistencies snuck into the gig than were on the prior live. As a result, where you get this really full, convulsive sound here, and the other instruments match up on a volume level, the album seems much more like an extraterrestrial bludgeon to the face. Warriors of Ice, turned up just right, felt far more the total package experience that I wanted. Ultimately, while it's a more formidable experience than is provided on Voivod Lives (from 2000), it's not exactly worth the investment unless you've a collector's interest or you must own anything involving that incredibly goddamn logo.