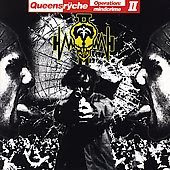 Mindcrime II is the Hyde to the original's Jekyll. The Goliath to the original's David. Meatier and modern, but inferior in every plausible department. The songwriting sucks, the musicianship is nowhere near as impressive, and unlike its consistent and cohesive forerunner, the album feels more like an attempt to offer the more 'eclectic' Queensrÿche experience via 'open minded' and 'worldly' composition rather than a unified architecture. They might have gotten Pamela Moore to reprise her role as Mary for this, and the late Ronny James Dio to take over Dr. X, but neither can help compensate for the lack of Chris DeGarmo, and even mindless of the recent drama between Tate and the other members, through which it has been revealed that the band was not evenly invested in its creation (for this or the albums surrounding it). Worst of all, Operation: Mindcrime II reeks of some banal attempt for the band to execute a 180 back to the style that originally put them on the metal map...only this is, for the most part, manifest through the title alone.

Last weeks theoretical minutes from the meeting of a band that next to no one had cared about in a long time: Our star is long past rising, folks. In fact it's sinking faster than a ten ton turd in a swimming pool. How do we turn this around? Well, what's our best album? Empire, dude! *the band laughs, the management smirks* Well, then, Operation: Mindcrime, the rest of the members agreed in unison. Yeah, yeah, I dig it, claims the singer, stroking his chin while giving his best Sartre impersonation. I'm not really into that metal music bag anymore, but the kids seem to want it. I've a few ideas. We can make it even more 'street' than the original, and use real orchestration than just keyboards. We've got enough in the budget. But it can't sound like Tribe, say the rest. We need more metal elements again, like the old days. Yes, yes, the BRAND will rise again. We'll get some TV spots, and merchandise rolling pronto...lighters, headbands, and maybe even Dr. X tees. But, Geoff, you know we don't have Chris in the band now, right? Ah, shit, well let's just scrape it together, man. Pull it together. This is the Jesus Christ of undertakings. We are saved. Saved!

All supposition aside, though, it was really inevitable. I wouldn't have been surprised to discover that the band had thoughts of a Mindcrime II since shortly after the original. I'm sure they received countless fan requests for that very thing down through the years, the only question is why it didn't happen earlier? Very simply, because this band was more concerned with tapping into the commercial success of the original's followup, Empire, and took this imperative far beyond the reasonable, leaving us with a string of ineffectual refuse like Hear in the Now Frontier and Q2K. To their credit, the Queensrÿche of the 21st century does their utmost to make this a heavier effort than the 4-5 leading up to it. That's about as far as the album's successes take it: songs like "Re-arrange You", "I'm American" manage to evince more aggression than anything I can recall of Tribe or Q2K. The incorporation of the symphony also feels natural with the loud, abrasive production of the album, not unlike Judas Priest's weakly Nostradamus. Queensrÿche went big for this, pulling out all the stops, and attempting to conjure the grandeur they'd lacked for almost two decades.

Unfortunately, no one reminded the band that this effort would be entirely misspent without the great songs that defined the first Mindcrime, and what we've got is a fraction of mediocre rhythms buried in a hulking heap of underdeveloped feces. The riffs suck throughout, juvenile note progressions you'd hear from any rehearsal room anywhere in America where some axeslinger is just fucking around (not even planning to use them). The muddied guitar tone here lacks gravity and power beyond the visceral, and the band keep a lot of their alt rock and grunge influences patterns in play, a handful of tracks like "A Junkie's Blues" reminding me once more of something left on the cutting floor by the Stone Temple Pilots. Really, Mindcrime II seems to have no precise idea of what it wants to be. Some songs want to be rock, some metal, some rock opera ballads cashing in on the "Silent Lucidity" idea but falling well shy of that song's consistent catchiness. For example, the finale/duet "All the Promises", with Tate and Moore playing off one another in their respective characters, is laughable tripe; "If I Could Change It All" trying its hand at the spacious 80s Pink Floyd aesthetic (which Queensrÿche had used on the prior albums) and conjuring boring drama.

The whole album lacks the poignancy and domineering melody of the original, and instead feels like a group of festive old farts leaping around to a selection of raucous distorted rock riffs. Tate can still scream, he proves this in a few of the pieces like "Re-arrange You", or his duet with Dio in "The Chase", which is sadly supported by some of the most mediocre guitars on the record, but in general he seems like he's putting too much effect on his tracks to make up for a slightly diminished power to his delivery ("Signs Say Go", for example). That seamless clarity and pitch from Rage for Order and Mindcrime has unraveled, and beyond that, the melodies in his lines have little impact. There isn't a single chorus on Mindcrime II that I can say captured me whatsoever, never mind with the surge of urgency and emotion in a "Speak" or "Eyes of a Stranger". A lot of backup shouts are used in tracks like "Murderer?" to make up for the lack of a hook, but they just sound silly rather than the menace exuding from a lot of the tough guy gang core.

A few of the leads and melodies show a modicum of skill and harmony ("I'm American", "The Hands"), but they don't really jive with the rest of their surrounding tracks, and stand out like sore thumbs. Supposedly some of the guitars were re-tracked at the last minute by one of the assistant engineers on the records, so it's unclear exactly who is playing what throughout, and Stone and Wilton were clearly under utilized. I've also read that Scott Rockenfield was absent here. Regardless, whatever person is drumming here is hitting with the about the same strength under such a mire of creativity, but I actually didn't enjoy how loud he was compared to the guitars on much of the album. Jackson has some freedom here, and he does his best to ground the punch of the guitars and the dominance of the vocals, but really, there's no room for him to vastly improve on such a cruddy selection of note progressions.

Lyrically, though the first Mindcrime wasn't exactly poetry in motion, this still seems a step down, a tired series of cliches that one can experience in just about any rock or pop song. Again, a listener can displace most of the individual tracks from the concept and appreciate them for any personal relevance, but there were no clever phrases here that caught my attention. The story itself takes place nearly almost two decades after the first (equivocal with the gap between album releases), and it deals with the primary perspective character Nikki getting his revenge on Dr. X and struggling through a downward spiral that leads to conversation's with Mary's ghost and all this other typical nonsense. It never needed a sequel, the story as it plays out is all too predictable, and it might have been better just to leave the original alone, with a more ambiguous ending. Even if the sequel was fucking Faust-level Goethe quality, though, the music is middling garbage that did not deserve a release under this banner.

Operation: Mindcrime II is terrible, and even if I could muster no expectations towards it due to the band's record of mediocrity post-1994, it still arrived as a great disappointment. Because, really, that's that. This part of the saga is canonized, and it's never going away, like the memory of putting on vomit-soaked socks one hungover morning. It will stink forever and it will sting forever.