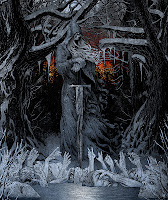 Angist is one of a number of promising Icelandic death metal acts to emerge in recent years, alongside Beneath and Ophidian I (in fact, the drummer of the latter is currently performing in this group), but by comparison, they've got a slightly more atmospheric and old school aesthetic about their writing which brings in 90s influences as broad as Immolation, Morbid Angel, old Suffocation, and even Human-era Death (what with all the textured, melodic tremolo picking they use as a main ingredient). Perhaps even a hint of Norwegians Molested, though this material isn't quite so unnerving and dissonant. While I think it would be a mistake to dub the band 'black metal' in any strict sense of the genre, I feel like you also get a mild taste of that inspiration in spots throughout the EP; yet, for myself, the biggest boon to Circle of Suffering was how it threads its resonant atmosphere over the bedrock of thrusted tremolo riffs and bludgeoning, dark grooves.

Granted, I did not find that the actual riffs themselves were all that strong, if only because we've heard these sorts of patterns countless times before. Angist does not exactly configure its note progressions into highly memorable sequences, but they are least performed with competence, and there is variety if one is willing to capitulate to the album's savagery, as with "Death Incarnate", a song that rifles through much of the band's stylistic range without sacrificing its satisfactory, gruesome momentum. Vocalist/guitarist Edda Tegeder Óskarsdóttir belches out a consistent death metal guttural, broad and bloody, her inflection seemingly evolved from the inspirations of forebears like Karl Willetts and Martin van Drunen. The vocals are often a fraction monotonous, but this can be forgiven to some extent due to their contrasted resonance over the thinner riff structures, and the fact that she's also busy PLAYING those riffs while she growls. Also I'd point out that the drums feel great here, never too polished like on a technical death record, but voluminous and crashing with a sort of live sensibility, and they lend a particular desperation to the guitars that helps darken the entire experience.

The song which stood out to me most here was "Silence", a slower, moody number which developed nicely into some haunted, melodic guitar lines cast out above the drudging undertow. It's simply more fulfilling and effective than the others, which more or less follow samey contours, even if those involve an appreciable dynamic range unto themselves. Most importantly, it's evidence that the band knows not to repeat itself unto monotony, and gives me hope that a full-length, which will give the band a lot more time to explore, will see even further experimentation and atmospheric embellishment. As it stands, Circle of Suffering was a decent recording, in both tone and execution. Angist has wisely eschewed the trends of ultra-atmospheric cavern death/doom and Swedish cloning that are so prevalent in today's scene. What they offer is something less common, and while few out of this particular set of songs were able to captivate me for more than a few spins, I think all the pieces are in place here to rain great annihilation upon death mavens in coming years. I doubt this is the last I'll hear of Angist, and for what it's worth, I will be listening.