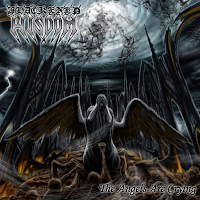 As much as I appreciate nuggets of extreme metal obscurity being made readily available through reissues, even in limited supplies, it's often hard to justify much interest when the content is as shaky, incendiary and volatile as Blackened Wisdom's obscure 1993 material finally coming to light in its intended 7" format. Don't get me wrong, The Angels Are Crying is nothing terrible (apart from the title), and I actually admire how much visceral aggression these Nebraskans were able to evoke for their day and age, but musically there's just not a lot of value beyond the sheer extremity being produced. Enough for some, perhaps, but as a sucker for quality riffing and song structure, there's just nothing here I could sink my teeth into. It's more or less a clusterfuck of clamorous splatter.

Some might already be aware, but this was Bill Taylor's old band in the 90s, before joining New York state juggernauts Immolation in the 21st century. Some of his band mates here were also involved in other of his past projects like Xenomorph and Laceration, but even the former's 1995 album, Empyreal Regimes, which I wasn't entirely fond of itself, is better built than what I'm hearing on this. Blackened Wisdom played primitive mesh of the black and death metal styles, with an undercurrent of grind to the blasting sequences. Taylor does the guitar and vocals on this, and he's got a blackened, hostile rasp that is drenched in its own simmering viscera due to the incredibly underwhelming production. There are lots of fits of bursted speed in the drums and guitars, and the bass tone is repulsive and voluminous in its overbearing drive, but throughout the 10 minutes I simply couldn't discern a single riff of interest. The titular B-side track has a decent stormy intro and feels more structured than the earlier tunes, but even there the darker, grooving guitars do little to quench my thirst, though the brief, doomy break in the middle comes close.

Comparatively, a few of the tracks come close to Angelcorpse, or the more recent Deiphago, though obviously the production of this is nowhere near so guitar heavy, and the music really suffers. Granted, there is some degree of glory to the fact that this has finally arrived after so many years, and I doubt the constituent members themselves find it to be a work of genius. More like a piece of history for extreme metal addicts who might never have heard it. But that's just not enough for me to recommend it, unless you are brutally obsessed with impenetrable war metal chaos and need some fast and grimy to floss out your ears and brain cavity, to relieve you from the stress of a hipster dominated environment. I enjoy Taylor's work in Immolation far more than his earlier bands, but that's still not enough of a reason that I could get invested here. Unless you're an extreme black/death metal collector in search of scarcity, or an audio masochist, you may wish to pass on this.