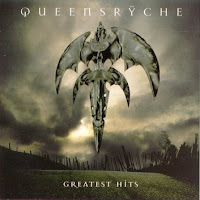 There are likely a dozen or more Queensrÿche compilations in circulation, some official and some just the same licensed tripe that most mainstream rock bands from the 70s-90s churned out and continue to churn out in the name of recycled profit. As part of my pilgrimage to revisit the progressive metal titan's backlog, I'll only be covering the two I've had exposure to, beginning with Greatest Hits, which was released near the dawn of the new century, the band's icon hovering proudly  against a cloudy sky in a timeless posture which presumably represents the strength of the material included. And, more or less, this is indeed a collection of the band's highest selling singles, so there is no falsehood in its advertising...the question is, does this hold any value for the long suffering Queensrÿche fan?

Not really. If you were, say, a rare teenager during the early 'oughts who had an interest in 80s hard rock or metal with progressive tendencies, and weren't just rabidly downloading and consuming all the albums available to you, and had heard of this Seattle mainstay and desired an introduction, then Greatest Hits might have satisfied you. Most of the songs are quite good, being that they are drawn primarily from the band's classic material ranging from the eponymous EP (1982) through Hear in the Now Frontier (1997), the latter of which is the point at which my own interest in the group's output had completely dropped off. The material is presented chronologically, with about 2 cuts per record (3 for their most popular effort Empire), and in all honesty this allows one to follow the band's develop through the more traditional power metal roots through their conceptual explorations and, ultimately, watering down into a more melodic and rock inflected project. Necessities like "Queen of the Reich", "Warning", "Walk in the Shadows", "Eyes of a Stranger", "Empire" and "Silent Lucidity" are all present, but let's face it, most of the target audience for this collection had already spun these cuts to death and possibly owned them in a number of formats (CD and cassette, at least, possibly vinyl).

Of more interest for me were the B-side "Chasing Blue Sky" and the full-band rendition of "Someone Else?" from the Promised Land album. The latter has of course been included with that album's 2003 reissue, but at the time this was the place to find it. "Chasing..." is your pretty average, mellow acoustic rock track that Queensrÿche were peddling quite often through the 90s and beyond, with an incomprehensibly basic bass line, melodic and soothing chorus, and the slight tint of blues. It's the sort of tune you could listen to deep in your cups while feeling sorry for yourself, but the musical composition is barebones, effortless, and far too safe; the chorus average at best, and even the bridge with its harmonica solo and glinted guitars does little to burrow it any deeper into the conscience. In short, it's as boring as Bud Light, a favored libation, no doubt, of many who enjoy songs like this. On the other hand, the heavier version of "Someone Else?", a longer and harder rocking alternate to the original which featured Tate and a piano, is an improvement. The sax might feel cheesy, and for the most part it's still a wimpy ballad with clean guitars and Tate channeling his best "Silent Lucidity" timbre, but it's mildly more developed and dense than the Promise Land version, and I do think the chorus is catchy enough for this period.

Greatest Hits is sensible enough in terms of its selections and ordering, and at least the band and label aspired to offer the fan SOMETHING he/she might not have already owned, but in the long term this has been rendered entirely ineffectual by better bargains in the band's remastered catalog, or the later compilation Sign of the Times which featured nearly the exact same line-up of tracks on its first disc (with just a few alternate choices), but also featured a second disc of rarities and demos. The Greatest Hits CD works well enough to check your lipstick when there's no other mirror available, or as a clean surface from which to sniff a few lines. The case could be used to replace another cracked jewel case in your collection. Otherwise, unless you're the person described in the beginning of the second paragraph of this review, and you spot this for a quarter at your local Salvation Army or used media outlet, its complete scrap.