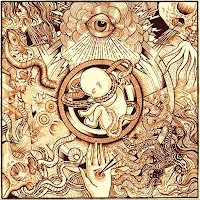 Chowder is not Josh Hart's first waltz in the doom ballroom, having put in many years in acts like Earthride, Revelation and Unorthodox; but it might just prove his most interesting and distinct when viewed against the other projects he's worked with. Formed far back in the 90s, and admittedly rather slow and sparse in its recorded output, the trio (also featuring drummer Chad Rush and bassist/cellist Doug Williams) became more active in the past 5-6 years, releasing first a demo and EP, and later recording the material for this album in the year 2008. So, already Passion Rift might seem a few years out of place, but frankly it takes such a fresh perspective on its composition that it's nonetheless timeless and compelling, because there's really little else I can think of that sounds quite like it...

Take an instrumental/stoner rock act like Karma to Burn and then amplify its inherent range of dynamics, then add in spaced-out elements like a Mellotron, multiple synthesizer waves and more eclectic and exotic instruments like a theremin, Taurus pedal, and cello. This is more or less the broth from which the sound is formed, and then splayed out in varied and fascinating riffs that keep a listener's attention regardless of the fact that there are no lyrics or vocals involved (apart from an occasional sample, like the Futurama bit used in "Insidious"). Individual tracks range from brief, extraterrestrial visions ("Mysterioid") to massive flights of atmosphere and primal ambiance (the 18 minute "Passion Rift"), and yet the album's sheer dramatic tension seems quite fluid and intact despite its jarring and oft disparate ambitions. Best of all, the riffs on this thing are fucking beastly, like the Primus meets Fu Manchu explosion "SaltCreep" or the darkened, twisting sludge bruiser "Custody" which closes out the album. Hell, some of the raw, explosive context of the writing even reminded me of wild Japanese schizo/funk/rock soundtracks to cartoons like Sakigake! Cromartie High or FLCL. Maybe a little Flower Travelin' Band alongside the Sabbath and Hawkwind.

The guitar tone and loosely 'jam' aesthetics remain consistent through the entirety, but otherwise they play with a lot of rhythms and tempos that are as often punishing as they are psychedelic, pissed off as they are progressive. I found myself wondering throughout Passion Rift if I would have preferred a vocal presence, and am left relatively undecided. I can't think they would hurt any, especially a unique, aggressive voice, but at the same time their absence doesn't really hinder the music all that much, due to its reflexive and relatively free form nature. Chowder feels like a cockfight between the whimsical and darkly-mannered, and it's served well by a bright, bold production that doesn't sacrifice its jamming and driving ethics for excess, overdubbed plasticity. I can't say that every single riff here sticks, and occasionally the transitions will seem a little sporadic for their own good, but as someone who has suffered so much samey stoner/desert rock, sludge and doom, this trio has so much going for it that they're bound to impress anyone seeking a more transcendental variety betwixt these niches. Passion Rift is fun, frivolous, and ferocious, both in looks and sound, and I hope we'll experience more of this project in the near future.