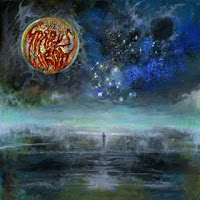 Say what you will about Century Media's questionable, lame metalcore signings (Destiny Potato? Really?) and trendy preferences throughout the past decade or so. Now that they've decided to pick up some of the emergent wave of retro and atmospherically inspired death metal acts, they've shown remarkably good taste. First it was Israel's excellent Sonne Adam and a reissue of the unsung champion Gorement's discography; now they've swooped in and snapped up one of Sweden's best bands in this field, Morbus Chron, whose excellent debut Sleepers in the Rift was a personal highlight of 2011. A Saunter Through the Shroud serves as a ligament between that album, and hopefully what is to come when they settle in to write and record their sophomore opus.

This is short, with just over 13 minutes and three tracks, but it continues to expand and define the band's alien approach to traditional death metal from both sides of the pond. Elements of the Swedish and Finnish cult classics are unified with Autopsy-like convulsions, especially through Robba's vocals which seem like a fusion of John Tardy, Chuck Schuldiner and Chris Reifert hanging out in front of a Chulthu-worship convocation. One of the band's sheer strengths is in how far they take their riffs. Unlike about 90% of the bands retrofitting death metal as a natural reaction to the technical/brutal titans that had dominated the field increasingly through the 90s and turn of the century, Morbus Chron actually seem creative, and relatively unpredictable. I feel that when I listen through one of their tracks, I have very little idea what is happening next. Sure, it's going to remain within a mildly progressive, otherworldly death metal primacy, but the precise notes being meted out do not mold themselves to my precognitive disinterest in Left Hand Path worship.

You'll hear anything in here from the more modern, 90s Death to a spooky, almost sporadic smattering of dissonant death and doom which can seem like a gorier mutation on Voivod. The guitars are suffused with a fuzzy clarity, the bass is oozy and individualistic enough to add an inventive subtext, and the way they all come together with the drums gives the EP a surprisingly earthen and natural feel which is at odds with the extraterrestrial, extraplanar horror of the band's lyrical inspirations. I wouldn't say that these three tracks took me quite as far as the prior full-length, or hit me as aggressively, but they share that same level of thought and plot that allows the Swedes to stand out in such an overcrowded field. This is the sort of act that might one day be spoken of in the same reverence as its forefathers. A Saunter Through the Shroud pays close attention to the tropes and lessons of its influences, but implements them far afield of reality. Cannot wait to hear what they'll conjure up next.