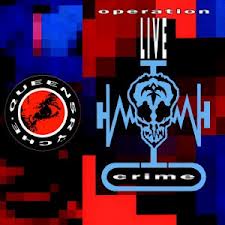 Being that Operation: Mindcrime is hands down one of my favorite metal works created by human hands (Alpha Centauri metal would be another matter entirely), I naturally had huge expectations for its live interpretation, released a few years later in both video and audio formats, the former of which I would recommend slightly more so than the latter, since you're getting the full experience and the group manages not to cock it up in the slightest. In fact, listening through this (and watching it) is almost a melancholic experience, because here was a band on top of the fucking world, pent up with talent and creativity that brought them into the living rooms of an audience well beyond the metal/hard rock bounds. The pinnacle of Queensrÿche, selling up instead of selling out.

This was recorded in Wisconsin in 1991; so even after Empire had been released to great financial returns, the band realized the magnitude of this album and the fans' desire for having these songs at the gigs. It features the full classic lineup of the group, and a number of others contributing character voices (including the lovely Pamela Moore, who provides the definitive Sister Mary in studio and on their tours). The tracks are in the same sequential order as the studio album, and the production quality is immense. Apart from the subtle differences one might expect at a live performance, like subtle crowd chatter and slightly less polished vocals and instrumentation, Livecrime is spot fucking on to the point that it's almost indistinguishable. And if you've seen the video version, you'll know that they're not standing still like a cluster of paperweights to ensure the pristine delivery of the songs. Tate is constantly pacing around in his lovably laughable 80s attire, and the rest of the band really feeling out the set list.

The rhythm guitars might come off a fraction more subtle, the vocals and leads a bit louder in contrast, but you can really make out Eddie Jackson's plunking, and Rockenfield abusing his kit with about as much integrity as you could expect over the relatively simplistic structures of the songs. I can only imagine how psyched a fan of Mindcrime would be to hear it all splayed out with such perfection, since the performances I had seen back in the day involved a mix of material from several of their albums. That said, even without the advantage of 'being there', I have to say Operation: Livecrime is the best set I've witnessed from the band. Every track just as fluid and flush as you could dream up, and since it involves all of my favorite tunes, it's a pleasurable 64 minutes of affirmation. Granted, I wouldn't mind had the band included another disc with the non-Mindcrime material, especially selections from The Warning or Rage for Order, but you really do get what you pay for, and this is precisely as it was advertised. My only downsides would be to grab the DVD instead if you can find it, because the performance works better assaulting multiple senses than just listening through the audio in your car; and those who prefer a live album to experiment more with the song structures and permit some looser jamming might find this too streamlined. But otherwise, a top shelf live effort here, standing alongside Live After Death and Unleashed in the East in quality.